This week was earmarked for another shot at the Operation Pegasus scenario with mate Rob taking the part of the British Operations Officer however it was not to be. The first intrusion into what I like to think of is my normal life, a bit of work, a lot of mapping, painting soldiers and playing wargames and being waited on hand and foot, sorry, got carried away there, was the bedroom. The new walls and ceiling were done along with the new electrics so it was now up to me to paint the place, I took my anxiety pills to get over several visits to DIY and paint stores. I was asked which colours I liked, this was promptly ignored and her indoors chose which she wanted, also how is it we can stop a rocket being burned to a crisp on re-entry but no one can come up with a paint which only requires one coat?

The second intrusion came from our (in my experience) less than worthy NHS, the diabetic nurse who until now has completely ignored me decided to give me a call and frighten the life out of me, I do wonder why she is bothering now. Anyway I have to try and change my diet for the next three months, not an easy thing for me to do as eating what I like is now about the only pleasure left to me and being Scottish I am partial to all the food which is bad for me.

Covid of course still intrudes and makes life miserable, or the handling of it does. Thankfully we manage a club Zoom meeting now and again and this is a real treat and as much as I enjoy it I would prefer, like everyone else, to meet in a proper club atmosphere. The dour Scot in me cannot see much of a change coming in 2021 either, I don't want the 'new' normal, I just want normal.

Now let's be a bit more upbeat, I have managed to get the odd hour of painting in despite my home life being in turmoil. I decided I needed more defenders for Berlin and went for Offensive Miniatures' Hitler Youth Squad, I do not think they are as nice as some of their other troops the poses being uninspiring, some are nice but I don't get the impression of fanatical youths. The figures are also fairly bare of military paraphernalia considering by this time they were front line troops. The uniform is typical of the HJ and is intended to be painted black, I decided to do half of my boys in Wehrmacht grey, photographs of them receiving medals in the garden of the Reichs Chancellery show boys in grey as well as black hence my guys are a mixture. I also decided to add a grizzled veteran as the commander and fished one out of my small lead molehill, the squad also comes with an HMG but I didn't want this so I will be sending it to bolster Rob's Last Levy. 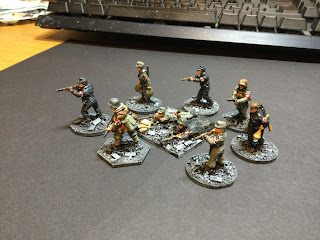 My birthday is coming up so along with Christmas I asked my boys to simply give me money, not something I would do normally but this year I wanted to possibly take advantage of Black day/week/month and add Rubi Points to my Rubicon account so it was easiest to get cash. For the former I took advantage of Warlord's buy 2 get 3 tank offer and ended up with a Char B1 (to be built as a German flammpanzer), a KV1/2 for early and mid Russian forces and a little favourite of mine, a Panzer II Luchs, I got in quick with the Luchs as they are now out of stock. I am awaiting several kits to be released from Rubicon, a British truck and Valentine tank, the latter will be heading to Russia for Lend Lease but for now I settled on two transports a Krupp Protze for the Jerries and a US Studebaker for the Russians, I also got double Rubi Points so a nice discount for the future. On a different note I am tempted to get a Panzer IV and a 3.7 cm AA gun and scratch build a Mobelwagen after seeing one built on Facebook, I could do that, right? 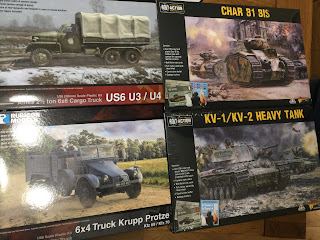 I chose the Luchs for my Birthday and went ahead and built and painted it early. A resin and metal kit from Warlord, and it is very nice, there were no decals with it but I have a shed load from all my Rubicon kits so no big problem. I painted it the usual Dark Sand with green squiggles and added a cross and number from the Rubicon transfers. I also decided to put wire aerials on the little tank, one because I could drill decent holes and two because these tanks were for recce and thus had good comms. I can now field a very decent and powerful German Panzer Aufklarungsabteilung (armoured reconnaissance battalion) and need to look at getting it on the table. 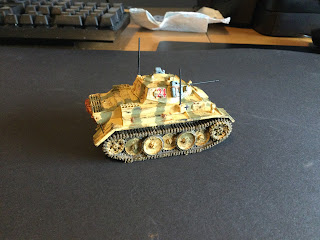 On the tray is my second present which is a British Airborne 6pdr anti-tank gun from Artizan. I was hoping to get the crew done today but too many intrusions. 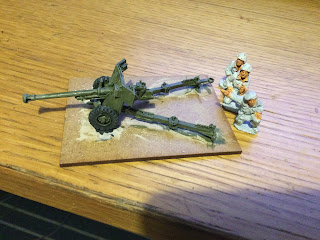 Before I go I recommend 'Mosul' on Netflix, a war movie, which I found different, interesting and probably realistic despite me never having been in Mosul. 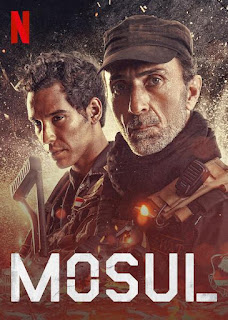 Posted by George Anderson at 18:59