Yes, yet another week gone, I have managed a lot more this week than previous weeks. I got on with the 23rd Foot Welsh Fusiliers and finished them at last, I hit a brick wall with this battalion and painting all the fiddly bits was a pain, my own fault I suppose as these guys wore mitres instead of the normal tricorne and that's a lot more effort. However the end result is pleasing and they are ready to stand in line, I looked back and I think they only took ten days so my huffing and puffing was pretty much pointless, no matter, it will be a few months before I venture back to the Seven Years War, painting at least. 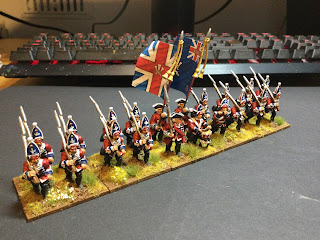 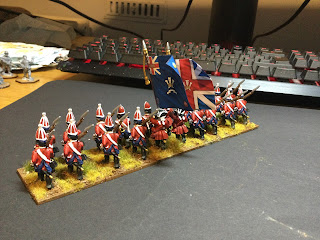 I notice this morning that the British Army can field at best an understrength infantry division supported (for the moment) by possibly one armoured brigade, and there we are in Lithuania prodding the Russian Bear. Laughable.

I digress, I am at last starting to receive all my orders to set up my Early War Germans and Russians, the latter are on preorder so still to turn up this month. I did get a Russian 75mm infantry gun from Company B as the Plastic Soldier Company were out of their version, the crew are nicer than they look but have the very early metal helmet which I don't like, so I bought an artillery crew from 1st Corps, and a nice little bundle they are. Although the Germans are supposed to keep me painting until Lockdown ends they just won't, I have the first squad ready for varnish and basing and I think they took about four or five hours all told, so maybe a few weeks to get the whole platoon done along with supports. Yes I have a wish list of early war vehicles to get but they won't take long either as I really enjoy building and painting them. The Germans are from Crusader and are very nice figures, I do have one complaint however, they do not put bipod's on the MG34, why, it just looks daft without one, I made one myself but this is not the first time I have had to make one. 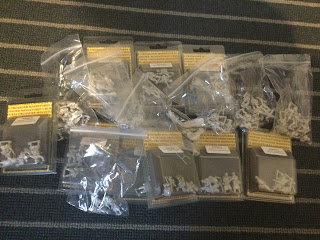 The campaign continues, in fact I am fighting a battle at the moment, the first as the Rebs withdrew from their positions at the last meeting. The Union troops are bravely assaulting a waiting Confederate line of battle, Hurrah Boys Hurrah! 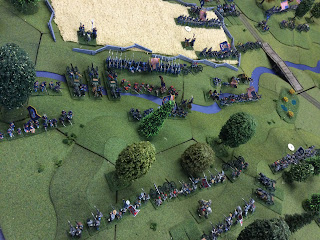 I asked for information on running games by Zoom or something similar and John Michael of Wargaming in 28mm and sometimes Smaller very kindly got in touch and took me through his set up on Zoom, it was also good to 'meet' another blogger and John does some really good stuff with Chain of Command. Zoom would be no good for me as you are limited to 40 minutes unless you cough up £139 I think, so I am going to look at something else and try it out when the ACW campaign frees up my table. Just in time to invade Russia I suspect. I really see no alternative here in Lancashire for most of the year.

Posted by George Anderson at 11:17