My life is a night off, but tonight I am not going to the club, there seems to be less on at the moment as we take advantage of summer or what passes for summer this year and I hadn't arranged anything for tonight.

Firstly I would like to welcome all the new followers, cheers.

I have my evening all planned out, an hour or so on my slingers who should be complete by the weekend, a little research on an upcoming map project and then several Canadian Club's or perhaps some wine and settle down to "Open Range" with Robert Duvall and Kevin Costner as the missus is out.

I have decided on the next Roman unit to hit the tray after the slingers, it will be the horse archers, I have thirty-six cavalry to paint for the army so I don't want to leave them all to the end and get cheesed off painting horses. I saw a tutorial online a few days ago about a fast method of painting horses, the guy drybrushed a lot but I now cannot for the life of me find it, so that is another job for tonight.

A lot of people moan about the size of Aventine horses and I did think the cataphracts a tad on the small side but these horse archer mounts are beautiful and look absolutely fine size wise albeit there is one which looks like it is half asleep and doesn't want to be here, that's character for you. In the unit deal you also get a load of extra heads and equipment, I did however cut the top of the standard off and put it on a sturdier metal pole, I plan to do this with the Roman standards as well. 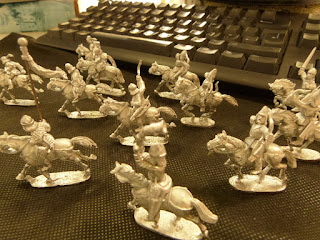 So there we are, an absolutely miserable day outside, rain and wind which of course keeps the customers away and allows me to prepare troops, blog and map.

I nearly forgot, I think I have spent the last on the Romans, there may be the odd small purchase but overall the army has cost a total of £522.42, which to be honest is less than I thought, not by much but it is a win in my book. It is a big army and you could field a half decent War & Conquest army for less, but if you want choice of units and at times a really big battle then you end up with what I have. I also have a retraction to make, the four guys at £8.99 were in fact eight guys, I didn't register the X2 on the site, duh!

Posted by George Anderson at 13:39