Once more my main PC is away getting fixed, it worked for ten minutes with the guy up the road, then it didn't once I got it back, it was returned to him only for him to bring it back and mumble something about the graphic card. I ordered up a new graphic card and it arrived the next day. Taking the stairs two at a time I ran up and took the offending card out, it took a while as the power lead points were designed to keep the cables locked in until the Zombie Apocalypse, brute force won in the end. Two hours later the machine was still kaput, at times the monitors came up and then died, I phoned Scan up and oh so matter of factly they said the graphics card might be duff, now I paid £250 for that card and it was as nothing to them, it's a lot of money to lay out for something which they cannot guarantee will work first time. It might not be a big deal for them but it's a big deal for me.

The upshot was that still being under warranty it has gone back, it might not have been the graphic card after all, perhaps it is the motherboard, if they tell me it is fine and it comes back and doesn't work because my study is bang in the middle of a wormhole or whatever I am getting a new one, my nerves can't take it and I need to work upstairs as well as downstairs. The fallout is that the missus will get a week off until the PC comes back, because there is no need for two people in the PO and although we have worked together for almost a decade I can't draw maps with her six feet away, it also annoys her when people come in and say 'hello George' while ignoring that she is behind the counter.

Anyway up earlyish this morning and hoping that one of the pub managers comes up with some cash otherwise we will be out of money around lunchtime on Monday, he should bring enough to get us through to Tuesday when our cash is delivered, fingers crossed. This is how the modern, slimline, efficient PO works.

Anyway to get down to important matters, I gave my Huns a gloss coat this morning having completed all the horse furniture last night and sorted out the next unit for the tray, 32 Goth Nobles on foot, sounds like a lot but they are mainly covered in armour so it is no big deal, although I have run out of transfers so will order more up this morning, I am still tempted to get one more Roman unit. I have decided to have a commanders tent guarded by a couple of sentries for my rally point, I will have some shields and weapons scattered about and maybe a standing horse if I can find one suitable. 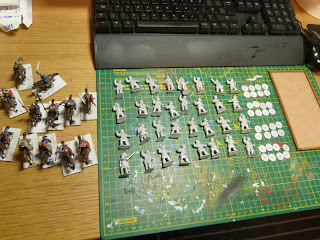 The rush map job is finished, a wee bit of touching up this morning and then I will have to move on to the lesser important one, I should have trench foot by the end of the month. 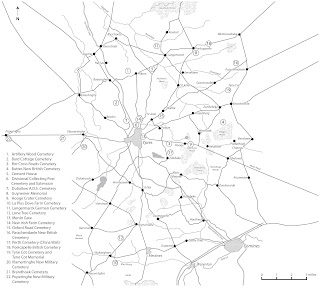 Posted by George Anderson at 09:12