On the outskirts of Caen

Phil and Jenny arrived five minutes late, which is not bad going considering journeying from the other end of the country up that one motorway, my son Stewart started off but the A66 was being its usual bloody self and he had to turn back due to snow and fog. The weather seems to have a particular bent for being atrocious whenever we or they attempt the A66.

Now, I pride myself in having both sides for whatever period I game and the terrain to match, however I was a bit surprised when Jenny said she had to pull the car around to the front and almost park at the PO door, something no one else has ever tried or managed. I then saw the reason, box after box came out the back of the car and into the PO, about an hour later we quite literally had the outskirts of Caen in the summer of '44 spread over my ping pong table. It was a beautiful set up. 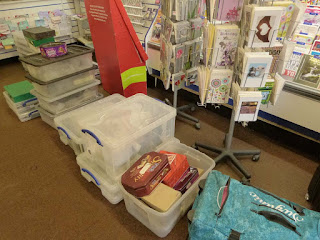 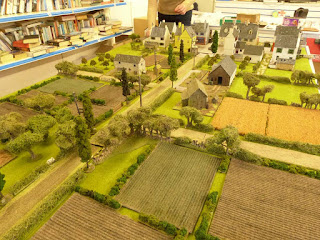 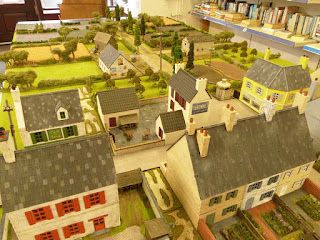 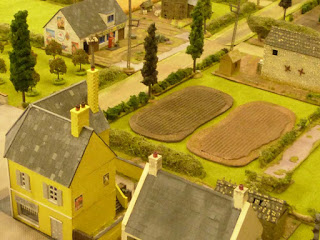 It was an introduction (again) for me to Chain of Command, it was a Scottish attack on the 12th SS and we had to gain the town square to win, it looked a long way away from where I was sitting. We carried out the by now famous 'patrol phase' which at least meant we did not have to start at opposing table edges and spend all day moving instead of fighting. There was a large stone barn in the middle of the battlefield and the Germans occupied it, along with an orchard on our right flank, it was me and Jenny versus Phil. I was on the left so gingerly advanced towards the barn while Jenny made a move on the right, I of course was hit by MG42 fire almost immediately and took cover, I brought on a mortar and got a shot off and dropped some smoke which halved the German fire but the barn remained a strongpoint.


I was in charge of three tanks and an M10, I brought the first Sherman on and I suspect it was a reconditioned one, as was the others as it happened, because it seemed to move in first gear, no sooner had it appeared than up popped a Marder III in the village and then up went the Sherman. I brought a second one in and started lobbing shells at the barn, but although I hit the troops inside I couldn't kill them, the mortar also sent a bomb into it at one point. My infantry were basically pinned as another German squad turned up behind the barn, I was feeling pretty helpless, Jenny was not having things much better on the right, although she was edging further up the road than I was. On came the third Sherman and it too fell victim to the Marder, shortly after this my remaining Sherman was also lit up, I now had infantry pinned, no armour support and not much chance of ever making the town square. Jenny made a dash on the right but the German defence was simply too well dug in and despite raining smoke on the area from her mortar her platoon was going nowhere, because as soon as it cleared there was wall to wall Hitler Youth waiting with itchy trigger fingers. I managed to bring on the M10 but it was too little too late and we called a halt as it was obvious the town would be held.

In the cold light of day what did I think of CoC, had I changed my mind, no I hadn't. This game flowed better than my previous couple of games and I quickly got used to the activation system, however, like the others as soon as I came up against an enemy squad with an MG and decent line of fire then everything stopped for tea. I only managed about three shots with my mortar team because I couldn't roll a 1, yes, I could have brought one of my leaders back but they were required up front. I could not believe that despite being pummelled by a Sherman, shot at by my infantry and having the odd mortar bomb dropped on them and losing half or almost half of their men along with garnering a huge amount of shock, nothing could shift the Germans from the barn. I also found the tank vs tank fire mechanism of handfuls of dice just plain strange.

At the end of the day both CoC and Bolt Action in my eyes have things wrong with them, you could possibly argue the latter more than the former but neither is perfect, but the selling point of CoC is that it portrays realistic tactics and rewards good command and control, I just do not see that. When you can have a tank and a mortar staring at a barn containing enemy troops giving your infantry a hard time and because you don't get a 1 or a 3 on a die they simply do nothing is not my idea of reality. So it is Bolt Action for me for WWII and a mental note to stop complaining and get on with playing.

I enjoyed the game more for playing with friends on a wonderful table with gorgeous toy soldiers, we retired as planned for my famous pork and chickpea curry which went down a treat and girded our loins for the coming North vs South contest the next day, my son was going to attempt the A66 again in the morning.

Posted by George Anderson at 20:20