As we approached Simonstown on the 22nd May we fired a 21 gun national salute followed by a 15 gun to the resident South African admiral, we were alongside the small naval harbour by about 0930. The weather was glorious and as many of the crew got ashore as possible as we were going to spend a long time on patrol after this particular stop. The communications centre ashore took over our signal traffic so only a few RO's were required as duty watch so as many of us as could went ashore.


Aparthied ruled the day back then of course and I found it very strange that there was two of everything depending on your colour, we had one black lad in the crew, a stoker, and he was not allowed to wear uniform ashore, which even back then as young as I was I thought was not right, he was British and serving in the Royal Navy, why should he not wear his uniform, but it was impossible. Whenever a ship docked at a port there was usually a waiting list of invitations to party's, trips, dances etc. which, if there was a lot a notice went up and you put your name down for what you fancied. Because our young stoker was the only black bloke he had his pick of the crop when the invites turned up from the local black and coloured communities, he had a large smile on his face when we left.

On my first run ashore with the help of some mates I sneaked in an all night leave pass, something you were not entitled to until you were eighteen. Our first stop was a South African naval bar where we chatted with an old salt who was happy to get the beer in, then it was the train and off to Cape Town. Some of us had already been to local shops and stocked up on Cape Brandy for the half hour or so rail journey, I can remember several being completely legless by the time we got to Capetown, god knows what happened to them for the rest of the day, at least two RO's were among the casualties, 'Taff' Anstey and 'Lil' New I think. We headed off to the main drag and commenced a pub crawl downing pints of Castle lager, we were welcomed and spoke to by many of the locals. We got split up somewhere and some of we younger guys got lost, a dishevelled old guy promised us that if we followed him he would take us to a club or some such, all he seemed to be doing was taking us further and further from the bright lights, my sense of self preservation kicked in and I insisted we leave him and head back to safety. 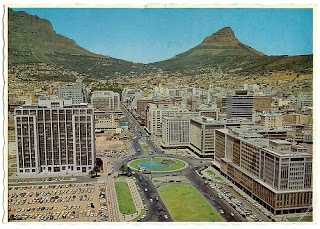 At some point we ended up in a very large club where most of the crew had washed up, we found the rest of the lads and settled down in the dark, smoky atmosphere to listen to music and drink, always hoping against hope to 'trap', navy slang for charming a young woman. Later all hell kicked off, a fight started and grew as more and more people joined it, not I of course, I grabbed a nearby waiter or some such employee and told him to get the manager quick only to be informed that the gentleman 'Lofty' had by the throat was the manager. The South African police arrived and they are not the kind of people who will pleasantly inform you of their presence by "'ello, 'ello what 'ave we ere then", batons flew and people were rough handled out and into the back of Land Rovers. I managed to escape all of it, made the station and boarded one of the last trains back to Simonstown sleeping all the way.

The next morning I was hauled up for forging my leave pass, I had enough presence of mind to inform the Radio Supervisor Bart Bartlett that it was his signature on the bottom and that he should have noticed and amended the times, not wanting to make a mountain out of a molehill Bart let it slide but my next all night leave would be in December when I was eighteen, or it might have been seventeen and a half.

I had one more run ashore and it was not as eventful as the first, we got off at the wrong stop on the way to Cape Town and as we left the station we began to be surrounded by a large number of people who seemed to live around the station, they didn't look too welcoming. Lucky for us one white guy in a navy uniform had also got off the train, barked something at the locals and they disappeared back into the shadows. After this we were invited for a cup of tea by a couple of old dears while waiting for a bus, they reminded me of Hinge and Bracket the singing duo, I think we all harboured thoughts of a nubile young niece or two on the premises but we were mistaken. This time of course I had to be back by midnight so the run ashore was rather tame compared to fight night.

We stayed alongside in Simonstown for about a week then sailed to take up station off Mozambique to begin our Beira Patrol for six weeks which was supposed to help bring down Ian Smith's government in Rhodesia.
Posted by George Anderson at 17:02