I finished my second French cavalry unit last week, the Apchon Dragoons, a nice red coat with light blue facings, this gives me two cavalry squadrons for each side now. It was time to order up the next batch of SYW figures and I drew back from the Grenadiers I wanted to get two more cavalry units, one each. Now I am not a big fan of painting cavalry and have reduced the squadrons from twelve to eight figures so I came up with a brilliant idea, you get two cavalry flags for the one regiment from GMB and if you just continue to add different squadrons you end up with a lot of flags left over, so why not build two squadrons instead of one. Now the really clever part is that if I ever do need a large unit of cavalry I can combine two eights for sixteen, voila! 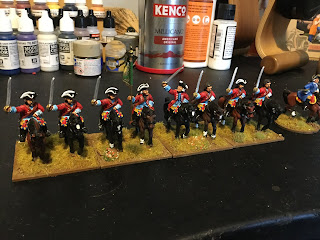 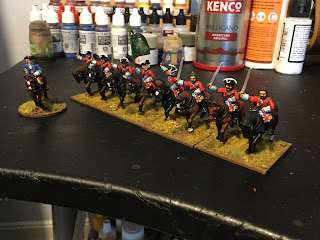 The not so clever bit comes next, instead of ordering basically the same figures I made a mistake and ordered up a new set for the British, these will not fit as the 10th Dragoons second squadron so I had to order up another set of flags as this lot will be the 7th Dragoon Guards. I get the infantry of the SYW, light, line and Grenadiers, but the cavalry organisation I find confusing, Horse become Dragoon Guards but are not really Dragoons, Cuirassiers, Hussars, Heavy, Light etc, and there are the Gentlemen regiments, royal regiments, non royal regiments, pass me the paracetamol.

Once this cavalry are done I think more artillery then the Grenadiers, in between possible new vehicles for WWII with the new releases from Rubicon in July. I also have to settle on what I am going to use for buildings as I am getting close to having an actual game with the SYW stuff. I could go cheap and just get MDF from Sarissa, Dutch/Belgian types or the more expensive, resin I think, from Total Battle Miniatures, or I could go really daft and get them commissioned, watch this space.

I also managed to finish off my extra SS LMG teams and a couple of extra figures, I almost forgot, in amongst the stuff above I have to do two British Para squads, that will be it for WWII for now until the winter months draw in when I think I shall be looking East. 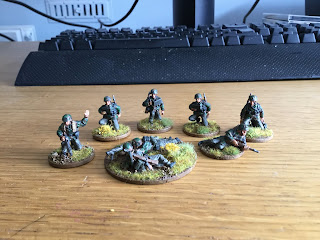 As I type Rob and Julian are in amongst it in Glasgow at the big Waterloo refight, with modern comms I know that Rob's Nassau brigade is under pressure but holding while Julian has won an 'Eagle' for destroying an enemy cavalry brigade with his artillery, so a good showing so far.

So now to Warlord's D-Day Overlord book, I have had more time to digest the contents, it is a hefty tome and I have to say worth the money if you have an interest in fighting D-Day. The information is fairly general and I don't know many wargamers to whom it will be new, it does however give a flavour to the nineteen scenarios contained within, six of which involve the British and one the Canadians, a bit of a disappointment for me considering Warlord are a British firm. I have nothing against the Yanks at all but it is a bit lop sided. There are a lot of new troop types along with weapons specific to the landings, new rules as well to cover this type of fighting, there are also 'Theatre Selectors' aimed at recreating the troops on the day for unique operations. I have my doubts about the experience given to many of the German defending units, I would suggest that the only troops who should be considered Veteran are the Fallschirmjagers and possibly the 21st Panzer Division, the 352nd Infantry for instance does not deserve to recruit Veterans, despite having a small core spread out within the division.

I would still recommend this book if you are a Bolt Action player, or even if you are not and simply want D-Day scenarios to convert. One word of warning, you will need a beach, ridges and lots and lots of defences, from large casemates to small Tobruk postions with one machine gun or mortar. During our recent Graignes game we were perplexed that entrenchments/foxholes were not covered in the main rule book but lo and behold there are such a thing, they are in the Western Desert Campaign book and in this one too, so only more money and hey presto!
Posted by George Anderson at 12:00