We started the afternoon off with the Open Range scenario, see an earlier post for the background, I took the cowboys and Simon the corrupt Sheriff and local bully Denton Baxter. As both sides faced off on Main Street Charlie duly stepped forward and put a bullet through gunslinger Butler's forehead, both he and Boss then ran for cover behind a nearby wagon.

Baxter and his henchmen tried to close with our heroes and continually came close to killing them but Boss and Charlie seemed to live a charmed life. Their friend from the Livery Stable joined them and took out a couple of Baxter's thugs with his rifle, Boss broke cover to try and sneak around their flank and bring his shotgun into close range but he found himself in the open and unable to dodge and was gunned down. This brought the cowardly Sheriff Poole and his gang from the jail into play along with several citizens who had had enough of Baxter's rule. Baxter found himself isolated, hiding in the Livery while the citizens with their new found courage cornered him and shot him down like a dog.

This left us enough time to play the Dalton's raid on Coffeyville, this time I took the bank robbers and Simon the citizenry. Once the Dalton's were recognised the locals ran to arm themselves and move on the banks. I brought Grat Dalton, Bill Power and Dick Broadwell out of the Condon Bank and across the street with the intention of making a run for the horses tied up in a nearby alley, Bob and Emmett meanwhile decided to stay put in the 1st National and shoot it out with citizens who had made it to the front of the bank and were shooting through the windows. I now made a fatal mistake and thought Grat and his sidekicks could finish off some of the locals who were heading in their direction.

This halt enabled the locals and the Marshall to seal off the alley and ensure the bank robbers would run a gauntlet of fire trying to make their horses. Over in the 1st National the gunfight did not go the way the robbers planned and Bob was left wounded as his brother bled out behind the counter. A fusillade of shots felled Grat and Bill Power leaving Broadwell to throw his weapons to the ground and surrender, shortly after this Bob also gave up.


For those who know nothing about the Coffeyville robbery the Dalton gang of three brothers and two friends tried to rob two banks on the same day, unfortunately even with wigs and false beards they were recognised as they had been Coffeyville residents in the past. The citizens rallied and gunned down four of the gang, only Emmett survived with 23 wounds to his body, he became an author and actor after fourteen years in prison. 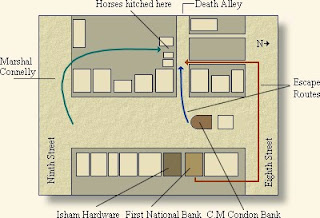 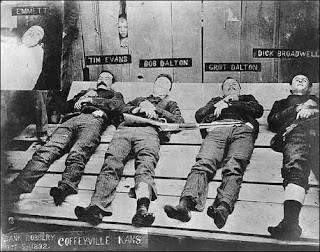