I finished the cavalry and they have now joined their companions in the Really Useful Boxes de rigueur these days for holding one's troops, and very smart they look. Now that I have banished that little doubt in my mind that is telling me I still need a few more skirmishers the Dark Age armies are now done, official. So since selling my five medieval armies to downsize and make room I have now added three more in the space of about eighteen months.

I managed to paint again last night, nothing drastic, just chickens, I bought some from Warbases to add to the pigs and cattle I have to adorn my Dark Age village, not the best things to show off my painting skills but done and dusted in less than an hour. I shall be picking up a twelve man unit of Carolingian cavalry on Saturday, I am looking forward to painting them. 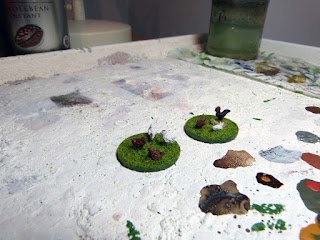 I apologise for the bad photo, but I am stuck near the window and it is blowing a bit of a storm outside and it is dark, so it is the best I could do. It's not that chickens are interesting anyway?

My son is having a lot of trouble with his new army, he primed his next unit and it turned out 'frosted' so they are going back into the Dettol to clean and start again, perhaps his spray is rubbish as that is twice now, so I'll have a look this weekend. He has also found that several of his Saxon Miniatures have very large metal pieces on them from the molds which must be dodgy and he is also finding that the definition of clothing and equipment on many is difficult to make out, I told him he should send them back, flash is one thing, chunks of metal are another.

Now to the good part, despite only managing the odd game here at home I can put up a 7x5 foot table and have a large 6x4 foot board in the back cupboard as well. This latter has been a bit of a pain in there as to get to anything else is difficult, something the missus reminds me of constantly. My son has jumped into War and Conquest in a big way and although he has no room in his house he has got the OK to use his works meeting room on a Sunday, the only problem is that the table is short and has round edges. We decided to buy a board to tag on the end and stretch it to 6x4, but the other night I found this beauty. I cannot get you a better photo as the site must be protected from copying.

I dithered for a little while then decided why not, this solves two problems, I can get rid of the old board and can lay this on top of the meeting room desk, everyone is happy, simples. According to the blurb it can handle a weight of 20kg, I am not sure whether I would test this with my 7x5 boards which I use for ACW on the top but we will see, it is perfect however for all my other games. I have two Gamemat.eu mats and if the quality of the table is the same I should be very pleased.

That's another quick map project in the bag, this one was required tout suit and deals with the war in Somalia. I now have three on hold awaiting the authors approval and one still to draw but with no time limit, so an easy day ahead.

Posted by George Anderson at 09:08