It was club night tonight but I got a phone call at 1600ish to say that Rob who was running a Black Seas game was not going to make it due to the weather, I could totally understand as the whole day here was windy and wet. This did not seem to alter the amount of customers who braved the downpour and mini hurricane to upset my day. With no chance of getting some free time to organise a game before the PO closed I decided I too would call it a day on the club. We have the big Christmas game next week so we should all be there, I believe it is a grand Muskets and Tomahawks game, no doubt with many twists and turns knowing Rob.

I woke to a disappointment in an email which notified me that my third Kickstarter would now be late, the people concerned have let us all know, in too much detail if you ask me, why it is being delayed, so we will see what happens. My second Kickstarter is now about to enter its fourth year of delay, the famous Lindybeige of Youtube fame who as far as I can see has no intention of ever completing his Kickstarter, I have been trying to get my money back by annoying him in the comments but of course he just keeps deleting me. I wrote to his publishing house and still no answer back, this is bodering on 'the principle' so I may have to hound him to the ends of the earth. No more Kickstarters for me, one out of three is not a good ratio.

Every cloud has a silver lining of course and I managed to complete my Soviet Scouts tonight, they are from Crusader (I think) and are very nice figures, I painted them in Amoeba camouflage in what I believe is the Autumn pattern. These guys have some nice abilities in Chain of Command and I look forward to giving them a try. 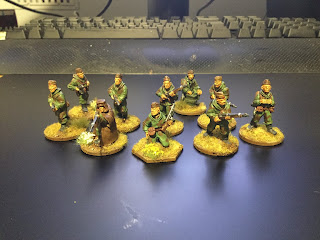 During my last CoC game I used 'covering fire' for the first time and had no decent markers to use, so I looked in my spares box and came up with some bases, flock and wisps of grey wool and hey presto, fire markers. While I was on my markers kick I needed some Patrol Markers for the game, so I spent an hour or so sorting out Soviet armoured insignia which I could use, I await the 40mm round bases so that I can print, cut out and stick them on. 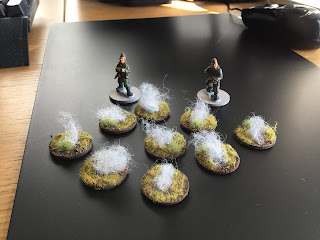 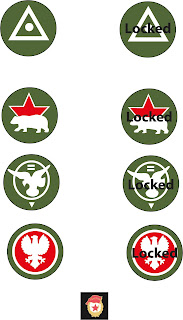 My birthday is coming up and No2 son gave me my present when I was through last weekend, he insisted I open it in front of him so I did and decided this gave me the green light to go ahead and build the Soviet GAZ-AAA truck with quad Maxim machine guns which he had got for me, there was another kit but that has to wait now until Christmas as my real Christmas present will not be released until January or February, long story. As you know I have already built the kits No1 son paid for, but I am not finished, the kits my wife kindly bought me should be here this week, one of which I will get on my birthday so more building and painting. Will all this stuff eventually see the battlefield, it will if I have my way. 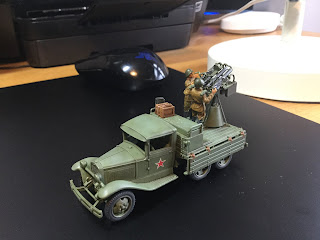 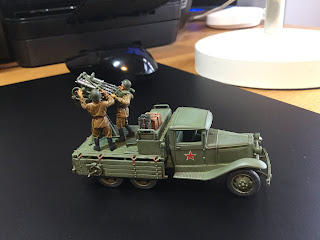 I have been scrapping around and found three more figures which I may as well paint as have lying about, two scouts and a tank commander looking at a map. I think the latter is Warlord, I got the Rubicon free sprue and to be honest I am not impressed, I prefer the chunky look to the perfectly proportioned Rubicon dolls, I cannot get past the hands, they just don't look right, having said that the crew on the quad look nice.

I needed one more thing to complete my Russian forces, Russian dice, yes I was daft to get them, I have a house full of dice but not Russian ones you see, each of my armies has to have their own dice, no matter how crazy that sounds. 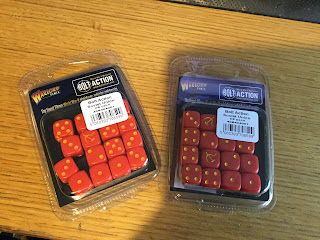 Nearly forgot, almost complete, not only did I get the dice I said I wouldn't, I have also ordered up a complete Russian village which I also decided I didn't need until a few days ago. Mate Colin at Charlie Foxtrot has cut all I need and the Royal Mail elves are bringing it as I type.

Posted by George Anderson at 20:50