What I did during the holidays.

The first thing was to build the Panzer III as the N version which I received from my wife for my birthday, courtesy of Black day, week, month, Frizzled Friday or Manic Monday or whatever from Warlord, in other words it was cheaper than normal. I would have preferred a Rubicon model but they took theirs off the market and will replace it with the usual dozen different designs, you know the one with the square bolts rather than the round ones, joking, but I wanted it now. 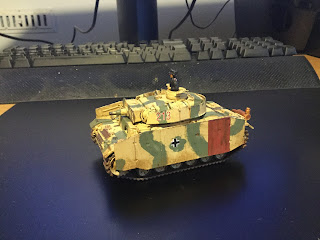 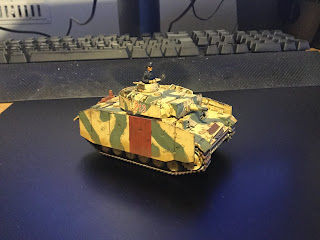 I had run out of patience for some reason and kept dropping bits on the carpet despite my fingers being covered in glue and then had to get down on all fours and spy with my little eye, thankfully I found all the bits but only after cursing myself for being a dolt, especially the third time it happened. As you know I am usually fairly placid but why would someone make the tracks on such a small model in four pieces, it is lunacy. Not only that I found out I had put them on wrong and had to tear them off and reset, still the small bits did not fit seamlessly. I was very close to throwing it in the bin or using it as a wreck. I persevered and got to the painting stage, this helped a lot and I eventually found some love for the little tank. I did find the Schurzen (side skirts) to be very easy to fit, even better than those on the Rubicon PzIV, so a small win. The usual paints were used and I took an idea from the Warlord site and painted two of the side plates as brand new replacements, in red oxide, a nice touch I thought.

Next up was the Tiger II I got for my Christmas, again from the missus albeit she wouldn't know a Tiger II from an Elefant or an Elephant for that matter. Why such a big tank, why not, besides there were at least two in Normandy, maybe more and I collect anything which appeared on that battlefield, also there were a fair few on the Eastern Front. Rubicon again have one coming out, no doubt superb as you also get the internals, engine, crew compartments and turret stowage etc., but I want one for wargaming, not modelling hence with a price drop it is again from Warlord. And of course it is an Italeri kit, but this time it all went smoothly, the tracks are again in four parts but they are so big they have guide struts, a much better idea, I hacked a break in one of the side skirts just to show possible damage, I have yet to paint the tank but have two schemes in mind. My only disappointment and I knew it as soon as I looked at the commander, was that he is huge, a giant of a man even for 28mm, no way was I going to use him, luckily I have the Rubicon free tank commander sprue and will hopefully fit that German officer on the tank. 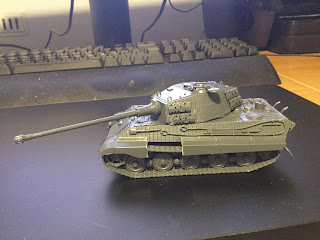 I have also managed to build all my Russian Front buildings from Charlie Foxtrot, I also managed to paint them all, finishing the last bits and pieces today. I had a look on Google at Russian villages and generally they are pretty run down, so I have gone for that kind of look, paint peeling and weathered. I found that if I watered down the paint it dried uneven and looked pretty good to me without drybrushing, although some colours are better for this than others, I have dry brushed some but not all, especially the smaller pieces i.e. pig pen, log store, cabin etc. I now have nearly everything for the upcoming campaign, railway tracks remain to be got for one scenario and I will be searching eBay for used track over the next few hours or so, these always come in handy so a good buy I hope. I have almost decided to buy three more Russian Front kits from Sarrissa, they have some posh peoples houses also the designs are more towny than villagey (are they words?) but they can wait. I also want to go back to the Charlie Foxtrot buildings and do a bit more when I get the time. 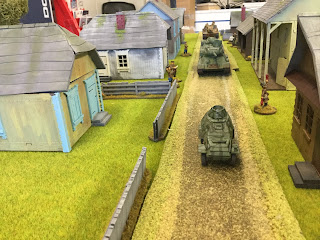 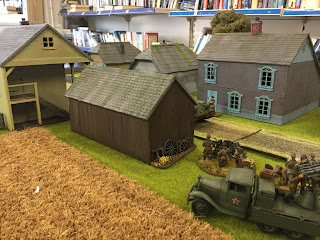 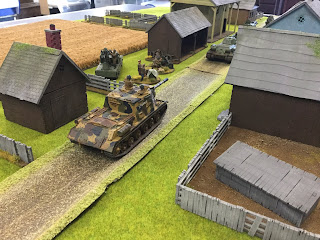 Now on the desk I have my Flakpanzer IV with an incredible six sprues to build, at a quick glance it looks like the complete 2cm Flakvierling kit and enough components to almost make an extra Panzer IV, I might get a wrecked tank vignette out of this. Whatever happens it is a lot of wasted plastic. 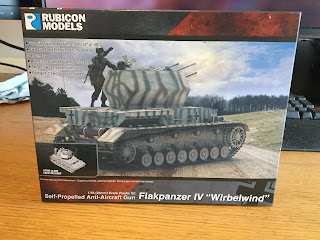 So that is it for the hols which will be over tomorrow but normality will have to wait until after the weekend, I do have two wargame days coming up before then, so a good start for 2020.
Posted by George Anderson at 14:42