Since the lifting of restrictions my wargaming has improved vastly, the club is back in business and I have managed several American Civil War games here at headquarters. I still have all that new WWII stuff to get to a table though, and to that end offered mate Matt of The Wargames Table a chance to play a mini campaign over Zoom as he lives near Bath in cider country. Happily he was up for it and as I had just completed a French army which he had kindly sent me it had to be the Gembloux Gap campaign, 3rd Panzer vs 1st DIM in May 1940. 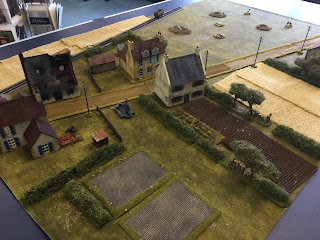 The French are defending the village of Perbais and the infantry of the Panzer division is attacking. I had ten points of support and took an Adjutant, infantry gun and anti-tank gun along with a Fifth Columnist who could, if lucky, nullify one of the French senior leaders. I later found out that Matt had chosen a sniper and a Hotchkiss MMG.

The French settled into defending the hedgelines, the forward one on their left but the second hedge on their right, they would eventually move up to the forward hedge but their initial deployment gave me hope that I could push up to the front without taking a lot of flak. My main attack would be on the French right as the open field to my right was a deathtrap. I got a bit carried away and tried to rush a squad over the cornfield to get to the hedge line before the enemy, my men leapt the hedge to their front like girls and only just made it over, but were then taken under fire by the French left flank, oops. Matt had also now sent his right hand squad forward. I had obviously made a bad mistake.

It was time for my supports, first on was the 75mm infantry gun and shortly after the little AT gun, both hammered at the French right and drove the lead squad back to their original position, relieving the pressure on my sluggish troops in the cornfield. The guns continued their deadly fire by now focusing on the French left, I also played Anton the deceiver on the senior leader directing the squad and this did cause confusion. I haven't mention the French sniper yet but he had been firing away all game and basically needed another course at sniper school.

I got carried away  now and sent two squads into the cornfield, but kept them just far enough back that the French on overwatch could not see them. My plan was to get a double phase and then move up and fire. I also brought my third squad on and sent them across the field, the French there had been pulverised by the guns and fled to a nearby house, this gave me the chance to pile on the pressure, hence my aggressive moves.

Matt now played a blinder and dropped the Hotchkiss machine gun on his left, and my guys in the field began to drop. Not a problem thought I as I turned my artillery on them, but I simply could not kill them and almost with impunity they cut down my boys in the field. They also had an effect on my grand plan, I could not spare the guns to support my left flank while that damn machine gun was still working so my other two squads hunkered down in the cornfield.

At last the shellfire took out the annoying MMG and then turned their attention to the survivors of the original platoon in the house. It was now that I managed to get a complete COC die, my next move was to end the turn and lift all the enemy overwatch, then move my boys on the left up and pour on some hurt. It was not to be however as my artillery caused enough damage to the men cowering in the house that the French morale collapsed. Perbais was in German hands.

A great little game lasting just over 3 hrs, I also felt for the first time I had a better hold on the game mechanics than before, although we both made mistakes, mine forgetting to shoot at times and Matt leaving his rifle grenadiers back at the chateaux. Casualties were fairly heavy on both sides but the French took the most, the Germans should get quite a lot back as they held the field and their morale was still very good. Only the clean up to do now and get ready for the next game at Noirmont.

Posted by George Anderson at 09:56