Big game at the club, Muskets and Tomahawks 1.0. I found myself with a dilemma having been offered command of the Scots or the Royal Navy, I decided to go with the Senior Service and found myself ashore with my crew and a detachment of Royal Marines. I was supposed to defend a small trading post but at the same time make sure a shipment of pelts which I had invested in did not fall into the hands of the enemy.

A large irregular force of Frenchies and their Indian allies were afoot in the dense forest looking for plunder and a chance to annoy the local British forces, a tall order as it turned out. I set my fine body of press-ganged men in a defensive position near a blockhouse into which I put an artillery piece from the ship, as long as my goods were well defended I paid lip service to trouncing the raiders. A large fight developed out on the left of my position where Simon and Paul fought each other to a standstill, the Scots making their way slowly through the awful terrain to join in.


Meanwhile I had made an effort and moved my troops forward to meet Jimi's Indians who seemed intent on forcing a fight, I had my marines to the front and expected great things from them, needless to say that was a false hope. A screaming bunch of savages burst from the woods and almost slaughtered my brave boys, they only just managed to retire to a nearby building and hunker down, my own character went with them. I decided that was enough offensive action for me, but the Indians were not yet done and another band flung themselves at some of my crew. The Redskins had made a mistake as this particular mob had been recruited from the gutter sweepings of Boston and were tougher than their opponents, the Indians fled.

The British position solidified as the Scots turned up just in time to help Simon and put the brogan's into Paul's survivors. Andy and Ed on the right flank only managed a few desultory volleys at each other as Andy had found the usual wandering Lady and her maid (why do these women wonder off into the wilderness alone every time we play) and was escorting her back to the settlement, Ed did not have the legs to catch up. As the game closed Rob counted the points and I sneaked a win having defended my loot and kept my reluctant crew from routing. Good game and a lot of fun as usual.

On the home front I finished off my new BT-7 to build up a Soviet tank platoon for early war and a truck for my French motorised squad. I wasn't too keen on the French truck, the resin part was fine but Warlord metal parts just look crap and of course there was no instructions, OK you do not need to be an engineer to put it together but would it hurt? Anyway the truck turned out quite nice once it had a coat of paint, so happy after all. I know I have said it before but that does it for WWII, no more large forces in the pipeline, I may get the odd model from Rubicon as they add to their forces but I have no need for much at all now. 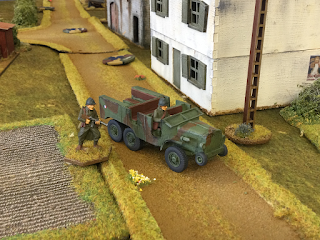 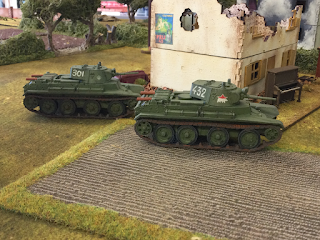 I am going way out of my comfort zone, I have now bought a Blood Bowl team and am going to hone my painting techniques on the figures having been impressed with several painting tutorials online and now that my son has the game and the club has a league it will give me something to do as the nights draw in.

Map projects continue to mount up, the ones for Charles X Vol. 1 have thankfully reached the end and are off to the author for comments, up next is the Cold War again and British forces in Nato with a book titled "Never Ready." Thankfully we were never put to the test. 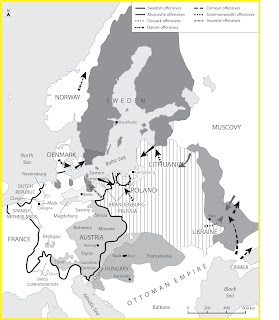 When ordering up some of the stuff for BB I saw that I had 'Reward Points' sitting and as I was spending quite a bit of spondooliks I thought I would cash them in, what can you get for .18p?

Posted by George Anderson at 11:19