The nights are fair drawing in, dark now when we leave the club, soon be dark when we get there. The club has certainly come back with a bang since opening, we have a couple of new members who seem to be intending to stay, there has been a trickle in the past but none became permanent. We also have had several who answered on our Facebook page that they will be attending but have never been seen. Anyway we are back and there has been an upsurge of interest in Black Powder games, this being brought on by Dan bringing his SYW armies and a couple of the guys building up the Epic scale Warlord American Civil War. This has had a happy side effect for me in that several members are now willing to play Johnny Reb and so far it has been great for me as it has proved popular. Although Rob was playing BP last night he brought in several Zouave regiments for me to look at and very nice they were too.

Simon had asked for a game of Johnny Reb while he paints up his Warlord figures so I organised a game for last night, four players with three new to the rules although Stuart has played one game before. I therefore kept it simple and we had a brigade each and the object was to take a large crossroads to enable following forces to deploy more quickly. This time I was Confederate with command of the Texas Brigade while Alex had Georgians whose officer was George T. Anderson, not a relative, Simon had the Second brigade of the First Division and Stuart had the First, the Iron Brigade.

The Georgia boys held the left and I took the right, my plan was for Alex to simply contest the crossroads while I swept Simon away and rolled up the Federal line. The flaw as it turned out was that both Simon and Stuart were able with their large brigades to hold the centre in strength and attack on our left, I was too intent on moving against the Second brigade to send help and Alex's line was pretty thin. It also did not help that Simon's artillery was very deadly and managed to take out my battery and then turn on the Texan line.

As the 5th Texas suffered shot and shell I threw charges in against the extreme Union left and swept it away, my elation was short lived as the Yankees took their revenge and in turn destroyed our left and centre in a series of charges. I decided to call it a day and pack up with twenty minutes remaining, a convincing Union victory and once again I had done my bit, albeit at the expense of the battle. It is also quite demanding running a game like this as you explain the rules and give advice to your enemies as the bullets whiz by your ears, I had a hoarse throat by the end of it. No matter, once again I had managed to get my boys on the table after years of R and R and of course, I had done my bit.......

I was supposed to have played the third game in our Gembloux Gap campaign by now but Matt's internet died and he was sent a new router which turned out to be the wrong one, so TalkTalk have managed to do what the French 1e Division d'Infanterie Motorisee have been unable to do and halt 3rd Panzer.

On the bright side this has given me time to complete my new Jump Off Points for the French, I got a pack of Refugees from 1st Corps and put four to a base, this way they can double up for civilians in other games if needed as well as JOP's. The bases are not suitable for putting a lot of clutter on and were too small for a cart, however maybe once shows are back on the agenda I might pick up some wheelbarrows or prams and rehash them. I almost forgot that Stuart printed off some new Patrol Markers for me embossed with divisional badges for my WWII forces, I could not find a suitable French design so went with one of their armoured tactical markings. 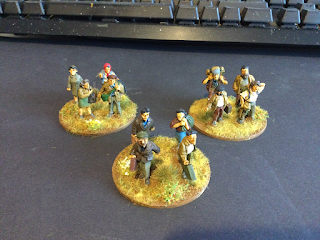 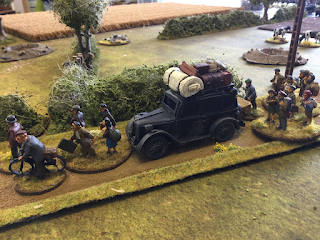 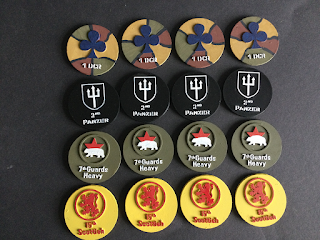 On the tray is a squad of Dragons Portes, French motorised infantry, I will get them a truck at some point. Due to be delivered tomorrow are my extra Pz 38(t)'s which I managed to get in a sale, this will give me a full tank platoon for a future campaign in Russia, I also need one more Soviet light tank but that can wait, at least for a week or so. I had planned to get some more Chain of Command done at the club but it will have to wait for another three weeks at least as I promised to host a game of Dead Man's Hand next week and the week after Stuart asked me to help playtest a set of rules he has put together for a sci-fi game.

Posted by George Anderson at 10:04