We had a break in Welsh Wales last weekend, specifically the village of Harlech, on the way we visited Conwy to again tour its magnificent castle, the next day we made for Caernarfon and the second imposing castle which like it's builder reminds me of the walls of Constantinople. Harlech castle was a mere few hundred yards from where we were staying. Wales I am informed is the most fortified country on the planet, while I am not sure of this it must have the largest number of beautiful castles all in the one place. Despite the castles the highlight of the weekend for me was a visit to a Slate Mine and the tour run by "Badger" a talkative, ex Royal Marine. We took the opportunity to climb a rather steep incline to get out of the mine rather than take the normal route, I was going to do it anyway but as the Memsahib had already expressed her intent to make the climb I thought I would go along to protect her.

So back to the club last night as I had missed it last week due to a cold, Bolt Action and an 800 point game as the Germans kicked off Operation Barbarossa. I was the Russians and chose four infantry squads, a BT-7 tank, a BT-10 armoured car, an MMG and HMG along with an Ampulomet anti-tank mortar. Duncan who was the Germans sent in a list with four small squads, one veteran, two medium mortars and a Panzer III. Now being an experienced player I thought this was going to be a walk in the park for my Soviets as it was a strange list to bring to a battlefield in 1941.

Duncan being the Germans was the attacker and had to take a village which I would defend, I only showed half my forces and kept half in reserve, it soon became evident that Duncan was going to go all out and attack my left flank. I made for a large wood there and decided to hold it or die in the attempt, but I was not taking the German attack seriously. I had warned against taking two mortars but Duncan was insistent, to my horror they never missed a target once and he hit first time every time, I lost my HQ and HMG very quickly while other defenders took serious casualties. I felt compelled now to bring on my armour.


The BA-10 I kept out of LOS from the Panzer III and began to take on the defenders of a small nearby wood, the crew's accuracy was astoundingly bad, the BT-7 I sent to the right and pushed my troops there to swarm the German left. Before this happened I also lost the Ampuloment but not before it helped to wipe out the German veterans, I was a bit shocked by my losses up to this point but as there was no chance now that the Germans would get any of the objectives I decided to damn the torpedoes and throw everything I had at the Jerries, in essence I now became the attacker while Duncan got bogged down. In the last turn all the vehicles fired on each other and none got a hit.

For the attack scenario the attacker needs more points it should not be an equal point game, and with the Soviet free squad (which I also do not agree with) Duncan was heavily outnumbered due to his choices. We ran into a couple of Bolt Action stupidities but overall it passed an entertaining club night. I have another BA game next week, Germans (me) against British Para's which I was supposed to play a week or so ago.

I have just about finished the Blood Bowl team and come to the conclusion that despite all the fancy tips and video 'how to's" I will not be painting a lot of fantasy after these, it is just not my thing so I shall admire from afar. I am also more than a bit cheesed off with my Army Painter brushes which have been pretty rubbish, I switched from Winsor and Newton as I had got a couple of bad brushes from them and at that price I could not afford useless brushes. But my foray away from these has not proved successful, so I might go back, depends on how my Citadel synthetic brushes work out, so far so good. 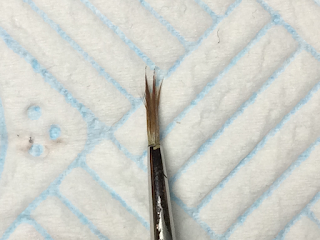 My French figures arrived from the far side of the Pond at last and they are very nice and should work if I ever field French engineers again otherwise they will simply be extra men. These are now officially my most expensive wargame figures and a lesson to me to be more careful with my dosh in the future. 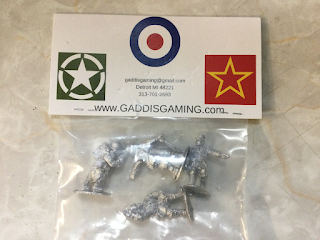 I will probably go to the FIASCO show in Leeds at the end of the month, I was very impressed with all the photos from the recent Partizan show in Newark and have a hankering to brave the outside world to perhaps see some at Leeds.

Posted by George Anderson at 18:06