With my retirment coming up a couple of weeks ago I organised a Johnny Reb II game for today with Rob, Fran and Stewart who had intimated he would like to join in the next game. I chose a fairly large scenario with five Union brigades and seven Confederate, the deployment and arrival times were dealt from a pack of cards so anything could happen and it would be unlikely if you got the same game twice.

I got lucky and as General Brooks I got to deploy two of my three brigades, Stewart, as General Howe already had his two brigades on the table. For the Rebs General Anderson (Fran) got one brigade on the table with another arriving on turn two, the third would arrive on turn three, Rob as General Early did not get any brigades on table and had to march on, his brigades arrived one behind the other over four turns. A delay the Confederates could have done without. 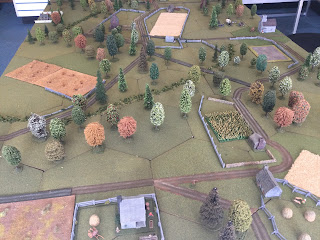 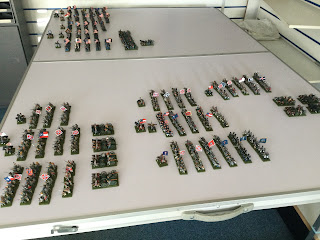 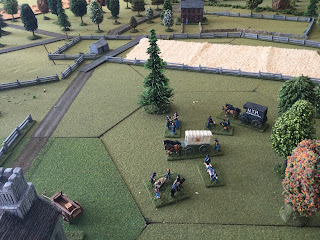 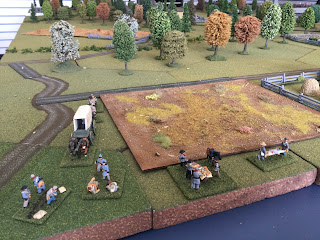 Fran was to pin my division while Rob was to assault the Union left, outnumbering Howe but taking time to deploy. Fran opted to keep his brigades together and stay away from a Union battery and regiment covering his right most deployment option. This turned out to be a mistake but it did not seem like one at the beginning. I decided to move several regiments forward to take advantage of the woods and a vicious firefight began, I had high hopes for this but they went up in smoke while the Reb replies began to cause heavy losses as Fran moved his regiments slowly forward taking advantage of his numbers and bringing fresh troops to the fore each move. Although my losses were severe my morale was unshakeable and my regiments at times were left with only the standard bearers and a few stragglers who refused to break.

Being hard pressed on my front I only managed the odd look across at the left flank, Rob took some time to bring his forces to bear on Stewart but eventually musketry could be heard in the woods, Stewart was pinned while Rob sent a brigade on a wide march to turn the Federal flank. My third brigade turned up just in time as the gap between Howe and Brooks was now in danger as the Confederate commanders saw an opening. But at the same time so did I, despite being hard pressed to my front and my losses I saw the opportunity to move against Anderson's right as the Rebs were finding it hard to break out from their crush. Although I suffered again from accurate Reb fire I held my nerve with the help of a battery of Napoleons and gave as good as I got, I also managed to peel off a couple of regiments from my late arriving brigade just in case things turned bad. Stewart had also seen the danger and expanded his line towards the gap, at the same time I brought up three fresh regiments to plug the hole, not a moment too soon.

Things now went badly for the Confederates, General Gordon leading the flanking brigade was wounded and his men slowed to a halt as the new commander was confirmed, although the Union lost a complete battery on this flank they had a few regiments which could be used as a fire brigade to help shore up the danger point. At the same time Gordon's front line was thrown into disarray by a rout on the front line. On my front I now felt secure as the Rebs had to leave the protection of the woods in order to push my right back and my waiting guns and infantry began a slaughter as they tried. Reb morale now broke all through Anderson's division and several regiments now fled to the rear taking others with them leaving a very thin grey line now facing Brooks.

It was now close to 1600 hrs and we had started at 1000 hrs. As we looked over the debris of battle it was clear that the Confederates could not gain their objective and although there was still fight in Early's troops they were not causing the same problems for Howe as Anderson had for Brooks. We agreed that Early's delay and Anderson not taking the chance on attacking my extreme left with the gun battery had had a detrimental effect on the Confederate attack. The exceptionally high morale of Brooks' men allowed me to hang on until help turned up, but it was touch and go.

So there you have it, a great days wargaming and my thanks to Rob, Fran and Stewart for their company, I can now relax after such a nail biting combat.

Posted by George Anderson at 17:26