The big day has arrived, my first game of Furioso Italian Wars rules. Mate Julian was bringing his forces which comprises large numbers of Landsknechts and cavalry, my growing French army has slightly more choices in that I have arquebus and crossbow armed troops, Julian has them but they remain unpainted for now. 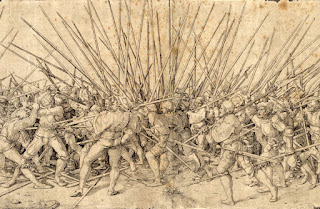 I am drawing maps for the latest volume in Helion's Italian Wars series and it deals with the battle of Ceresole, and on looking at the map I thought I could base our game on it. The only thing we lacked were decent amounts of shot troops but I thinned out what I had and we would just have to compromise. I of course was the French with three pike blocks of French Old Band pike, Italian pike and Swiss professionals along with cavalry and artillery, Julian, playing the Spanish had three Landsknecht blocks (one should have been Italians) and one Spanish along with his cavalry and artillery. The set up was as near as I could get it to the battle map.

Before we deployed my army suffered the affects of a recent plague and I lost a stand from a mounted crossbow unit and a group of skirmishers suffered one hit. This could have been a lot worse but Julian was being a gentleman and it was our first game after all, he could have chosen a gendarme stand.

I thought Lady Luck was showing her displeasure, as we rolled our initiative dice about a third of my army went Impetuous and raced for the nearest enemy, I rolled my eyes. This was evened out by the Italians on my left flank along with a nearby skirmish unit refusing to move, until the last turn of the game as it transpired. The Spanish did not show any inclination to rush my line. As the first of my cavalry units hit the enemy every one suffered and were pushed back, I glowered at my Scots in the centre, what was Albany playing at. My infantry continued as fast as they could towards the now advancing Landsknecht infantry, my guns barked and played on the Spaniards, but my cavalry had caused me to fret. 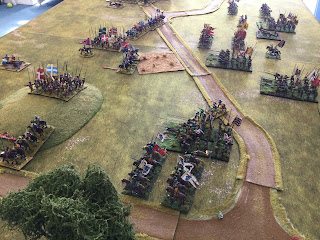 The troops had listened and all my cavalry rallied and pushed their tormentors back in the second round, things now looked a lot better as the Swiss smashed into their hated enemies the Landsknechts, my money had been well spent on these mercenaries and the Germans were broken and dispersed. A unit of Gendarmes picked on a poor skirmish unit and rode it down at the same time, things suddenly looked better. Quite quickly all my remaining troops also threw themselves at the enemy, apart from the Italians of course. More Landsknechts charged into the recovering Swiss but then again wished they hadn't as the burghers rallied and set about destroying a second German pike block. On my right my Old Band pike managed to stop being pushed back and then held their opponents to draw several melees despite being outclassed.

The Spanish were now on the back foot as the Swiss cut up another Landsknecht unit and my Italians now at last moved forward, although the Spanish held their own on my extreme right I now had some very angry Gendarmes flushed with riding down the arquebusiers approaching their rear. Julian offered his sword.

Now what of the rules. A bit of a faff with rolling initiative dice for each unit at the beginning but it works, you certainly do not have a great deal of control over your troops, especially if they go Impetuous as most of mine did, none of the Spanish were this keen. We covered pretty much most of the table with what we had so there also was not a lot of maneuver room and the battle was pretty much a stand up fight. The combat is interesting as you get to hit, then save then both sides carry out a Combat Morale test to see how they feel, you can actually lose more men than the enemy but beat them because you feel so much superior. This was especially the case in both combats involving the Swiss above, although they also dealt out a lot of casualties. There is also an Army Morale number which as you lose units your side deteriorates until it breaks, they can be Fragile, Weakened then Broken, in our game it was obvious who was winning so we didn't use this, but it seems like a good idea. You will notice that I mention the Plague above, you can throw on an Events table at the beginning of the battle and this was why I suffered a hefty penalty before we started, I also like this idea. We have some questions which need answering before we make our own rules on these if we have to.

So, I enjoyed it and so did Julian, thankfully no need to look at Pike and Shotte at the moment, how would they fare with bigger games, not so sure but we will get to that some time in the future. It only remains for me to thank Julian for an entertaining afternoon's wargaming and I am ready for more.

Posted by George Anderson at 16:33