A quiet afternoon away from maps so what better than to play the Tax Collector and give all my troops a chance to get back on the horse so to speak, after being thrown to the floor. It gave me a chance to get most of my 28mm Dark Age terrain out, but now I see that I require at least one or two more trees, possibly some wattle fencing, that all elusive Roman Villa and a road. I looked at the very nice but expensive Roman road made by Grand Manner but I have settled on one by Terrain Mat which is flexible and nice and simple, you can even get it with cart tracks on it, by settled I mean I am looking at it, not quite buying it though, not yet.

You can get the gist of the game from the Scenario page. 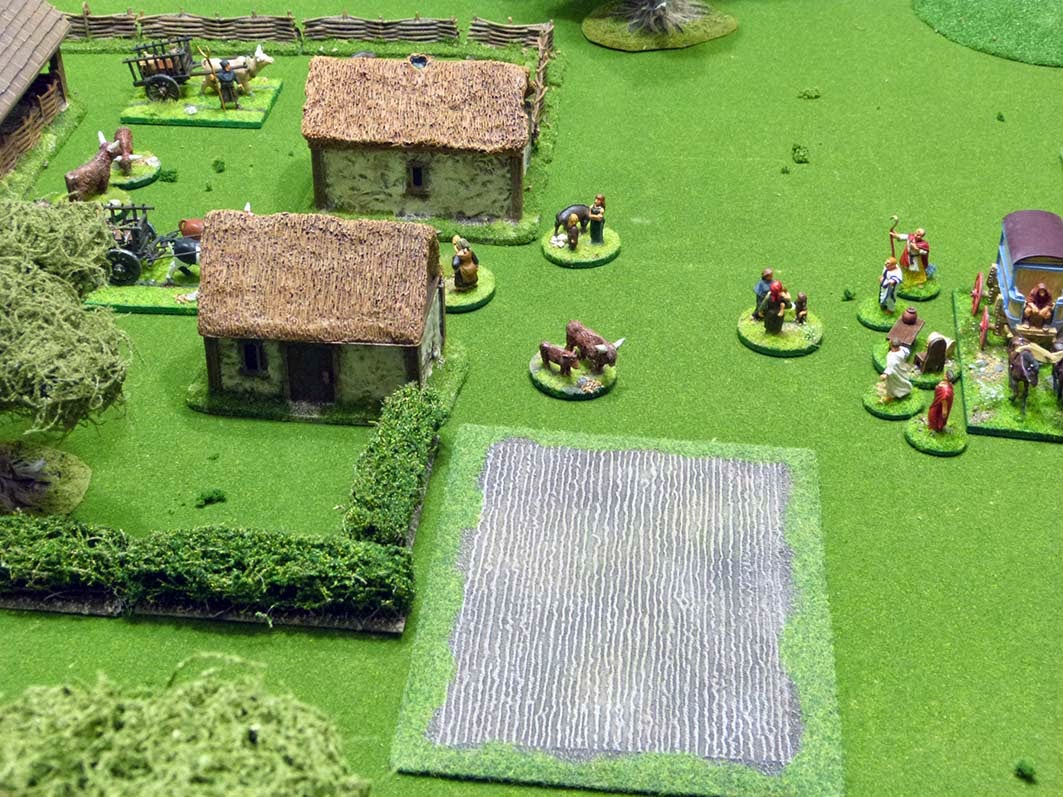 Our man sets up his stall, his friends in attendance and even a representative of the church to make sure things are handled correctly, or more likely to see that God's share is not short. 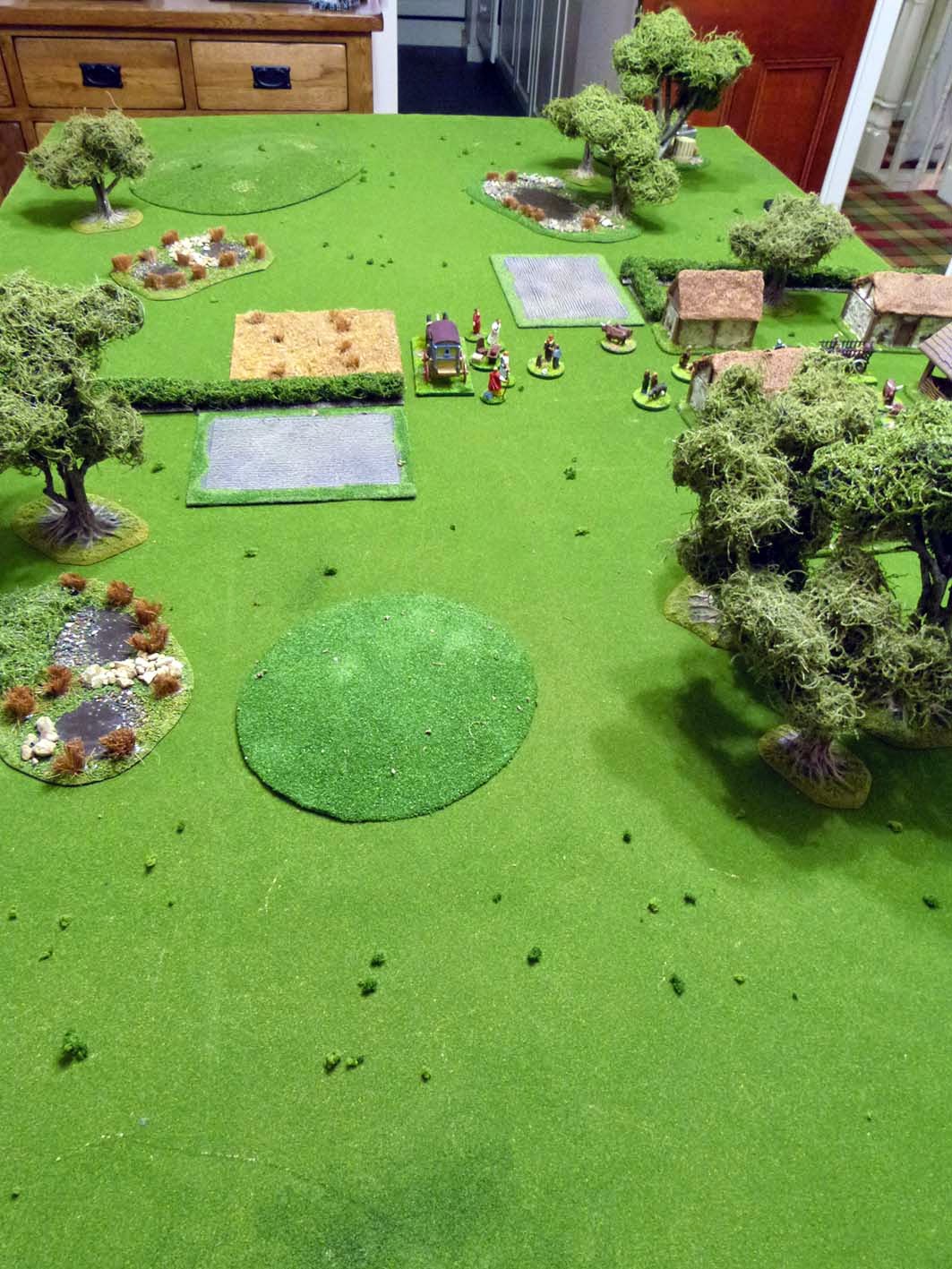 A quiet pastoral scene, a slight delay perhaps as they work out the password and username for the new fangled abacus. 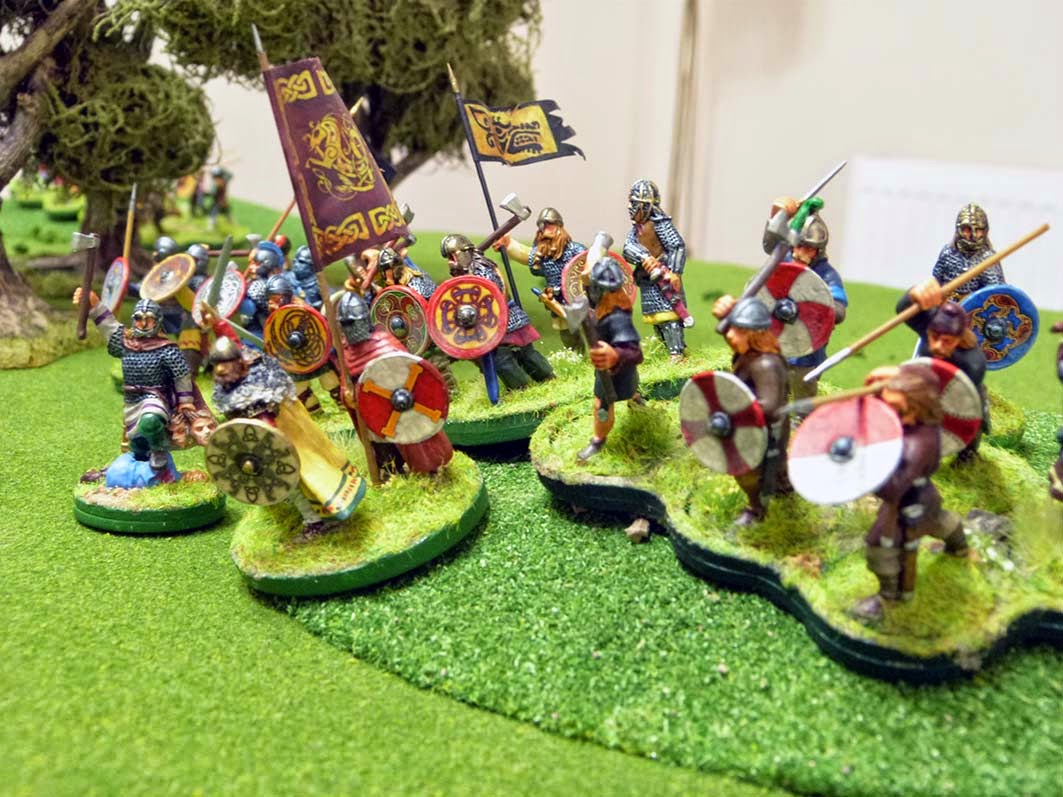 And now it happens, Ceolwulf a notorious raider has arrived with almost his entire band of warriors, lacking only some missile troops. 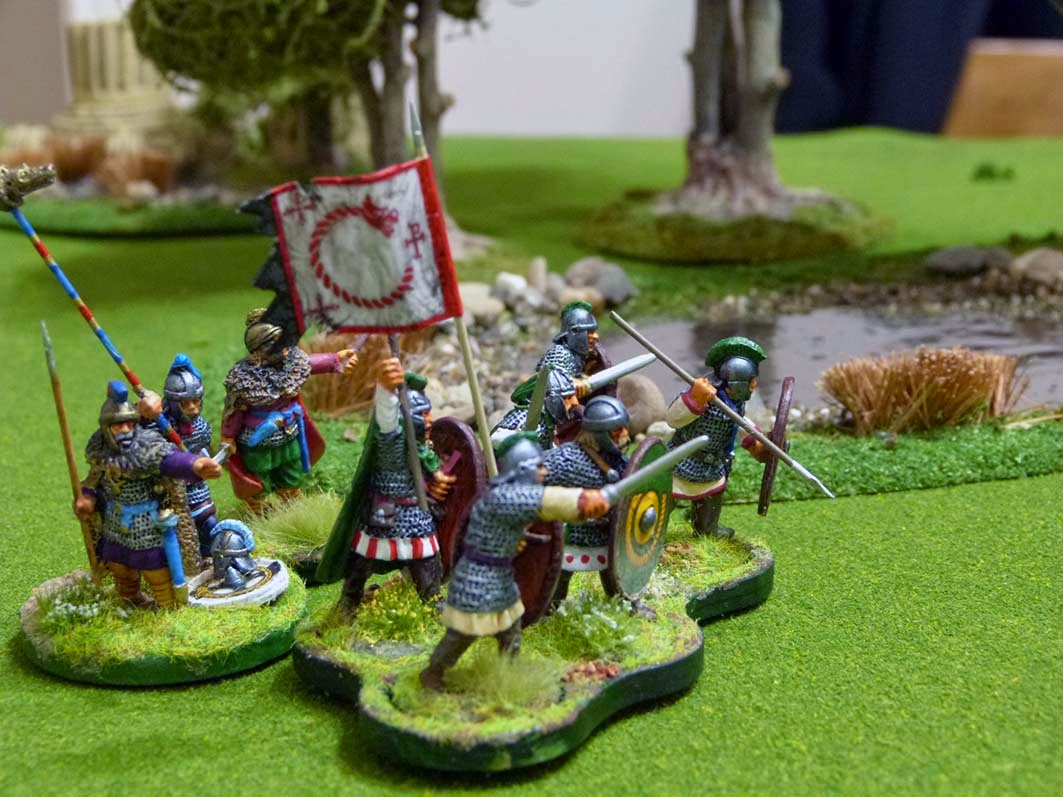 Tribune Atticus appears at almost the same time, but with only his bodyguard, however he boldly steps forth. 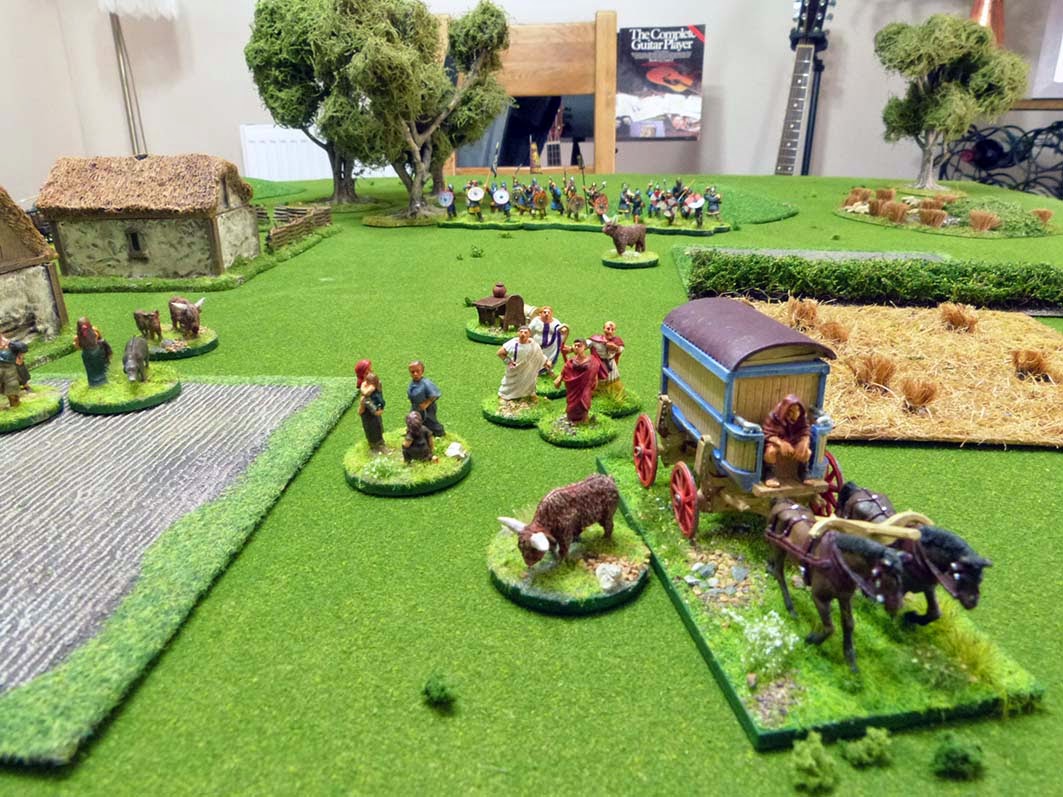 "We're outta here" the fat cat's try and catch their wagon, leaving behind their collected goods, as the driver is more interested in putting space between himself and the Saxons. 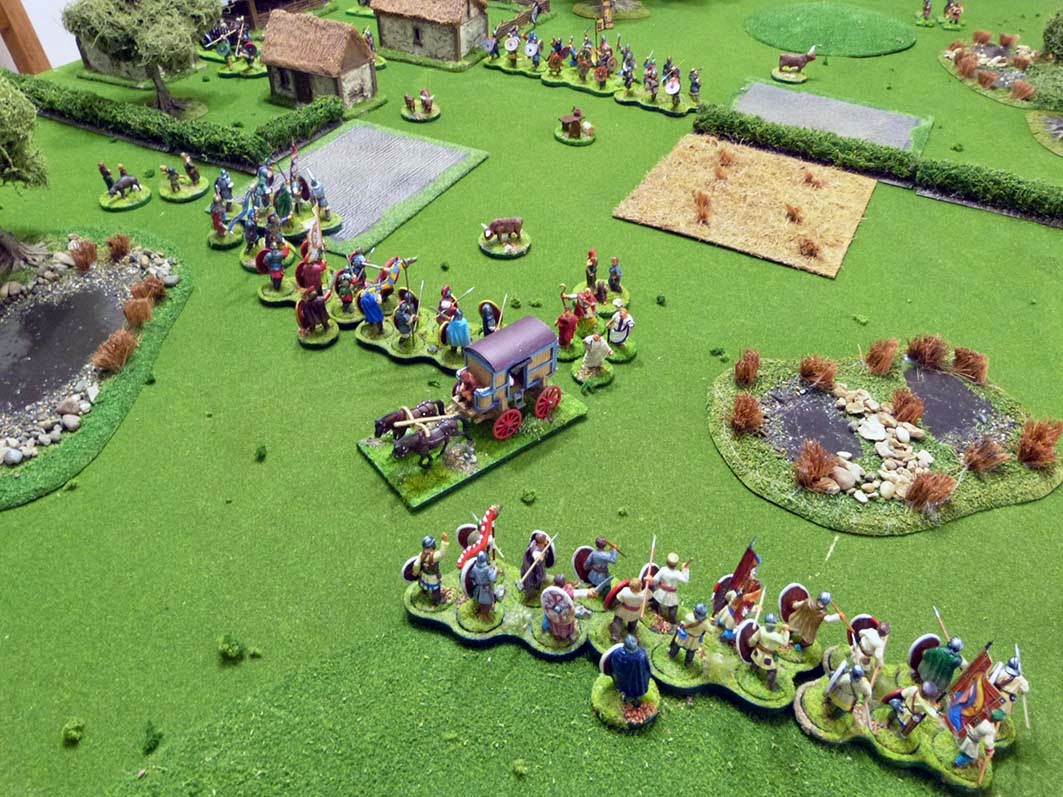 Ceolwulf closes on the prize, while the rest of the British turn up and sprint for the village making excellent time. But not quick enough, Ceolwulf holds the line while his companion Eadbald makes off at an astounding rate for home. Osfrid the remaining Saxon noble throws his men into Atticus' bodyguard with a superb hand of attack cards and .... blows it! One slight wound on the British commander, 16+ dice and one hit. 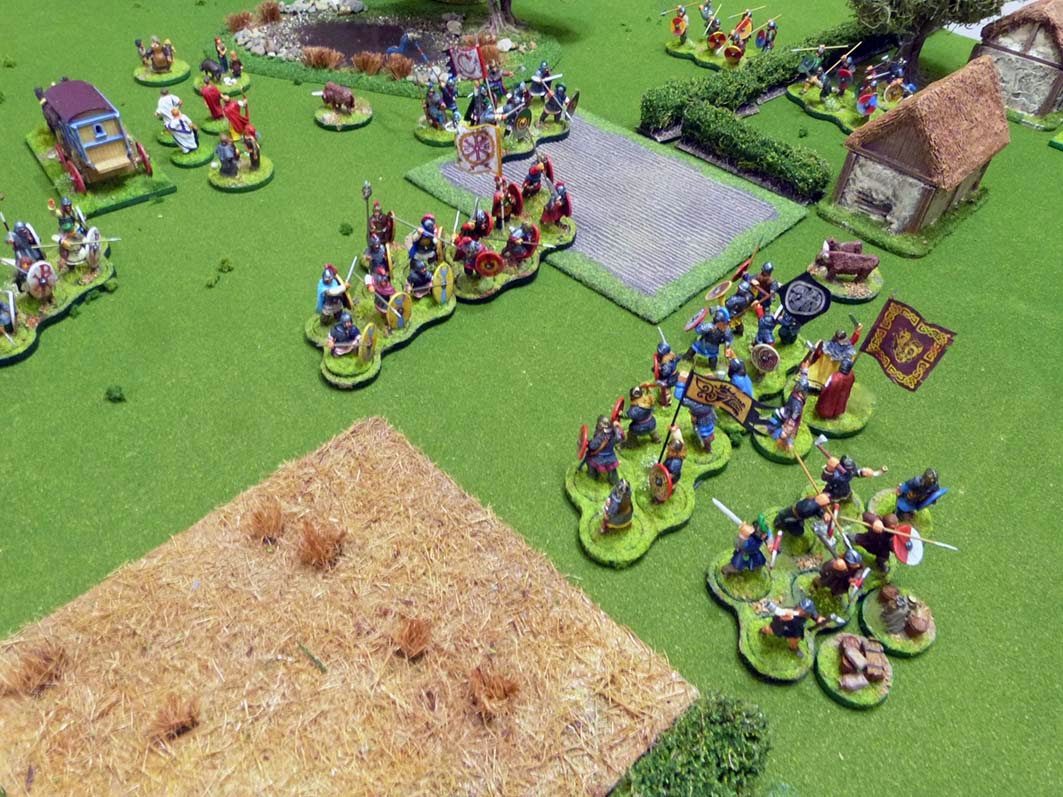 Just as the British warriors under Magnus form shield wall and look like having a chance at an overwhelming attack on Ceolwulf and his hearthguard, the wily Saxon takes the lead and legs it. 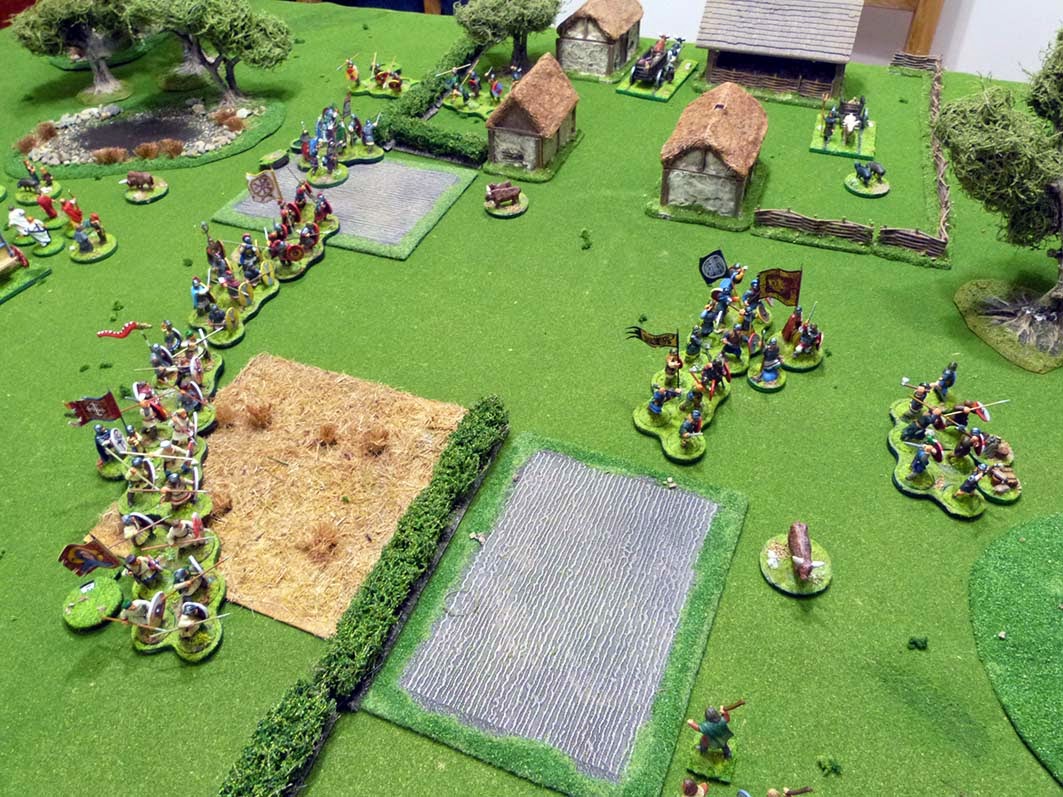 Despite having to leave one group to their fate, the rest of the Saxons literally sprint off the table leaving a bitter Atticus, but a surprisingly cheerful tax man. Ceolwulf on the other hand was beside himself having lost six warriors to cart off an empty chest!

Nothing is certain in Dux Britanniarum, you have to play the cards you are dealt and also go along with the activation process, the Gods certainly favoured the Saxons in this game, they got all their men on first, and made more than decent movement rolls, especially when fleeing. The British on the other hand brought one group on for the first round, then, just as Magnus had an opportunity to charge in Shieldwall, Ceolwulf played a Step Forth and legged it. Despite 'winning' the game, the Saxons lost the only combat of the day, some really dire die rolls on their side, and found the chest empty on their return to their ships.

Definitely one to play again, but maybe next time I will have that road and some more trees.

My Romano-British are more Roman than British, they started off less uniform, but I could not resist the pull of Late Romans and the Little Big Man Studio transfers, I have since corrected this with my much larger War & Conquest Romano-British army which is a lot rougher around the edges and with which I am pretty chuffed.