Shoot out in Carefree

Dead Man's Hand at the club last night, I wasn't sure how many players we would have, I half expected four but in the end it was only Simon and I. I thought I would just take the stuff along and wing it once there, I had a vague idea for a shoot out and it's always good to bounce ideas off Simon.

We set up, I was the Pinkerton's looking after a gold shipment, the stage had somehow lost a wheel before it could get to the bank and was stranded in Main Street, so I had to ensure the gold got across town to the bank. A local bunch of ne'er do wells decided to take the opportunity to relieve my boys of the loot.

The gold was heavy so in order to carry it as quickly as possible I set two of my strongest to carrying, they could shoot wildly with their pistols if they had to or drop the bullion and join in the coming mayhem. We set out well and traded shots with the bad guys as they progressed along the back of Main Street towards the bank while setting several riflemen on the nearby roofs. It took a bit of time to get the crate off the stage but things still looked fine as I saw an opportunity to catch the outlaws in an alley, at this point we had both lost one man.

I had a good hand of cards and managed to force Simon to take cover, I had hoped to cut his numbers down but it didn't happen, then I lost another officer while Simon's leader fumbled his pistol and was scrabbling in the dust for bullets (out of ammo), we both had a laugh imagining this. But a few minutes later I stopped laughing as my commander and his 2 i/c bit the dust courtesy of the rooftop snipers. Meanwhile I had had to drop the gold and put my remaining men into the firefight, but numbers were against me and the low down snakes ran for the hills.


Things had been pretty even up until the snipers took out two men almost at the same time with two excellent die rolls, but it was a nice little game, we decided though to give more thought to the games rather than make them up on the night, I am sure this is the best way to go. We had a talk about the scenario afterwards and decided that the Pinkertons would have to defend the stage while the driver and his mate repaired the wheel before continuing to the bank, a die roll would determine how long this took, this was better as it did not take two men out of the fight to carry the loot.

I popped down to the local model railway shop this morning hoping to get some inspiration for my next terrain tile only to find he had been moved due to repairs and was basically operating out of a cupboard with almost no stock. I did however see a nice little van for a couple of quid which will be Frenchified in due course.

I have a few archers on the tray for now which I suspect will be done for the weekend. 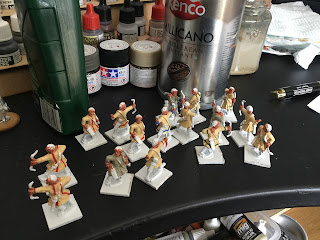 I saw some beautiful work by Paul O'Gorman's Advanced Studio Miniatures this morning and was intrigued enough to look up his prices, which to be honest I thought reasonable for the quality, so much so that I did a quick calculation and thought, yeah, possible. I have never got anyone to paint one of my boys and have always remembered a daft quote that went like this "if you can't be bothered to paint them, why should they be bothered to fight for you" and you know how superstitious we wargamers are. But Paul's figures are just so beautiful, who knows, my only concern would be the mail, Paul lives in Oz you see, if nothing else I am inspired. 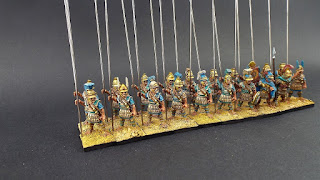 Posted by George Anderson at 13:14