Just turned 9.30 and I have had at least ten people in so far, so many in fact I have not even had a chance to look at my emails or check out more Salute photos from some of my favourite blogs, I do hope this does not continue, I have maps to draw.

I have now finished my extra unit for the Patrician Roman Army and that should be it, yes I mentioned mounted Roman archers but we will see about that, they are not actually required. While looking in the boxes this morning I suddenly thought I did not have many foot skirmishers and if I add four more I have the choice of three twelve man units rather than two and spares in the box or two large sixteen's, which is the upper limit in War and Conquest any more is bordering on gamesmanship, anyway something to think about. 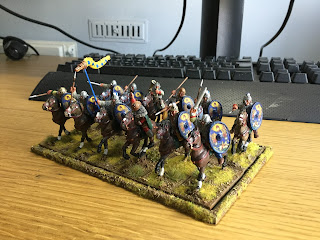 Where do I go from here, a good question. Due to things outwith my control I think our bi-annual WAC meet up is coming to an end which is a great disappointment to me as I thoroughly enjoyed them. I have made some very good friends and will no doubt continue to meet up with them and play WAC at least twice or more a year so it is not all bad news but I did enjoy the whole social thing and meeting new people and fighting new armies, it gave my wargaming a shot in the arm just when it needed it.

The fall out of course is no more large armies for now, I have four big WAC armies and had been planning a fifth for next year, something with pikes, but I would be mad to continue and simply fill up Really Useful Boxes with model soldiers to sit in a cupboard. I could possibly be tempted to build a small, no, I never go small, force for Muskets and Tomahawks, but again we will see as that would mean more terrain along with the troops.

I do want to continue to tart up my terrain, do some work on my WWII stuff, whether I need it or not I will have to get a Tiger at some point and hopefully get some new Wild West figures to add to my small collection for Dead man's Hand once the new Black Scorpion stuff comes out. I also feel the need to get my teeth into a campaign, but campaigns need commitment and that's hard to find.

More bleedin' customers, at least Bob left me with this nugget "I got chocolate cake thrown all over me yesterday George, it's tough in the gateaux!"

(Note for John Perry, John my emails keep bouncing back?)
Posted by George Anderson at 10:14