Another unit finished as I rush towards completion, the guard stand ready for orders. I went for blue cloaks to fit in with the shield pattern and white for the tunics and crests, although I have weathered the cloaks and shields as per normal I did not to this with the crests. Anytime I have washed white it turns out dirty and I did not want a guard unit having dirty crests so I have left them alone, I suspect this will also help them stand out in the line of battle. 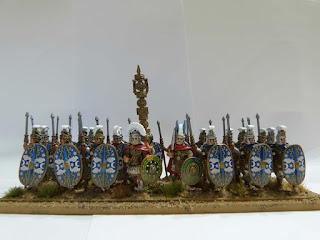 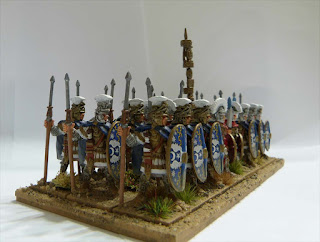 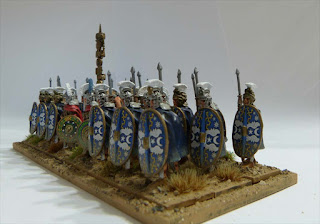 I cleaned up the last infantry cohort last night although I have still to glue arms and shields to the figures, when I say cleaned up it is an odd nick here and there on their bases as the Aventine figures do not have flash. I had bought battle damaged shield patterns for the last cohort (sounds like a movie), but have decided they would stick out from the worn look on the shields of the rest of the army so I got replacements. I am also tempted to do them in plain red as a nod to what we expect Roman soldiers to look like rather than the dark red I have in reserve, if I stick with the latter then the Praetorians will certainly stand out from the line troops.

I have just realised I have done nothing about artillery for this army and as I shall no doubt meet more elephants in this division of the tournaments and also plan some for my Sassanid army then these are a must. I shall therefore have to source some soon.

A lull of a day or two as I finish a map project and prime the last cohort to hopefully start on Sunday, this leaves the above artillery and the Contarii cavalry unit and the army is done although I am thinking of putting another couple of slingers in just in case.

Posted by George Anderson at 09:37