Crack of dawn again and giving the M10 an ink wash, it is now complete, unless I get those decals of course. I really like this tank destroyer, it has that look of meaning business about it. The British, unlike the Germans and Americans used these in defensive positions and not as tank hunters, this changed later in the war as German offensive operations became few and far between. Although hampered by their open top they had the superb 17 pounder anti/tank gun which was more than a match for the formidable German tanks and could kill at long range. 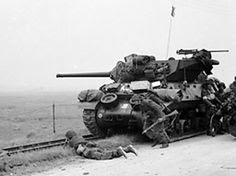 My only problem with the kit was the front headlights, apart from having to search online to find out where everything fit, the rear lights were molded on to the resin hull so why were the front lights not molded on? They proved too awkward for my modelling skills in 1/56 so I left them off, the amount of times they stuck to the tweezers rather than the tank meant I gave up, hopefully in the heat of battle 'that guy' won't scream out that that tank has no lights! 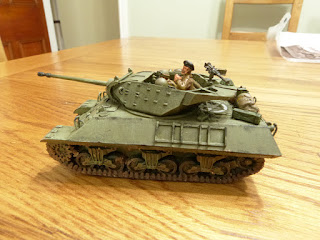 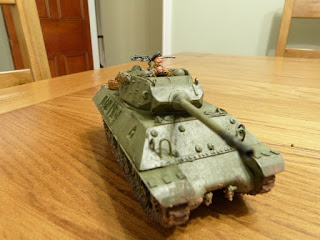 As tempted as I am to build the Panther I can't see me needing it for several weeks yet, so I decided to get my last German squad ready, I have four already and this one is not really required but I could not resist getting them when I saw them painted up at Phalanx. As I said they are slightly chunkier than my Artizan figures and the helmets look bigger with the camo cover on them, but they have a lot of character as do their British, which I will get at some point, I also saw their Forward Observer so one of them is on the list as well. The officer in the back is Warlord and will be a Captain or Major, the figure in the left foreground is particularly nice, he is crouched over carrying his rifle with a stick grenade in his left hand, I also like that the squad has a mix of steel helmets and caps. My main German force nearly all have camo smocks, so these guys in shirt sleeves and the normal uniform will be something different, I am looking forward to painting them. 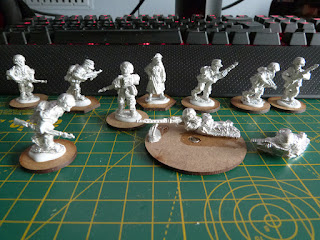 I have four maps to do on the American Civil War and have three complete and will finish the last one tomorrow, so I had 95% decided to do a run through of a Bolt Action game this afternoon and evening as the missus is out. She has decided to order up a ton of wood for the wood burner due to the weather not being as good as it should be during a summer, so that means a lot of effort on my part to take it to the out house and stack it up, I may not feel like doing anything but killing someone this afternoon.

I am beginning to get more than a little cheesed off with Terrainmat, I still do not have my roads after three months waiting, I was promised them this week and here we are with it almost gone.
Posted by George Anderson at 09:11