I couldn't resist getting this up this morning, I have no patience, I almost completed the M10 and Marder last night but got up early this morning to put the finishing touches to the Marder.

I am unsure whether to add foliage or netting to the tank destroyer as I really like the look of this vehicle and these might obscure some of the detail, I have also not added any mud to this one either, so I shall mull that over in the next few days, all of these things can be added later, it will get stowage.

I am not convinced about the figures, they look pretty awkward in the fighting compartment, but to be honest there wasn't a lot of room anyway in the real one, I wouldn't have liked to have been the driver and needed to get out in a hurry. 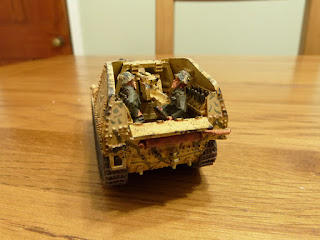 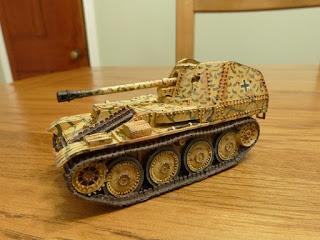 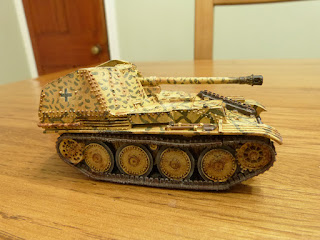 The camo scheme is from the Eastern Front which is appropriate for the campaign and apart from that one guy you always bump into who will point out it wasn't seen in Normandy, no one else will care.

The M10 is 90% done, only the tracks to paint and the camo netting, stowage and mud to put on, the full works for the M10. I have hit another snag with Warlord Games, looking at pictures of how the expert painted the machine on their site I noticed that it is supposed to come with both US and British decals, mine didn't! So that was no hatches and no decals, poor stuff. On the decal front I managed to slide a star on to the engine grill of the M10 and was very chuffed as I had glued the turret down and made it doubly awkward for myself, I was not so lucky with some vehicle numbers and a name for the turret. One side went on perfect then I screwed up the other side, thank god the British didn't like markings on their stuff, if Warlord send out the missing decals I shall endeavour to put a name and the anti/tank unit number on, but we will see.

I have almost completed the paperwork for my upcoming mini-campaign "Into the Reich" a set of six battles all tied together as the Russians cross into Germany. I am stealing some ideas from a Chain of Command campaign and find that the Germans have the option of taking a Panther for a counter-attack, I don't have a Panther, so I ordered one up, to keep my forces even the British will get a Churchill next. I have ordered a Rubicon Panther from Ebay, it was slightly cheaper and has better reviews than the Warlord one and I am not taking any chances with Warlord now unless I have to, their loss.
Posted by George Anderson at 08:46