Another stint at taking my life in my hands trying to get out of the village, but needs must to get to civilisation, now they are not only zooming up the only two way road in and out but they are on their phones while doing so.

Anyway, after another fraught day dealing with BT I settled down and took my Dead Man's Hand stuff to the club, due to the faffing about I hadn't managed to come up with a scenario so we just went for goodies versus baddies, three lots of six bad men against two lots of seven lawmen. I took my Mexicans with The Spider looking for revenge after his rep took a dive in the last game. Ryan was late which probably didn't help our overall plan, but then again we didn't really have a plan. The Law were in one quarter of the table with me opposite them, Andy in the far corner and Ryan's men at the end of the same row of buildings as the lawmen these were eventually moved into the centre of town opposite the jail just as Ryan turned up. 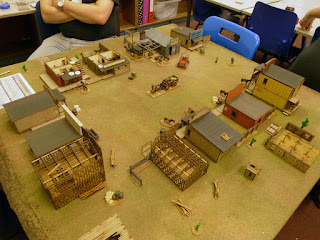 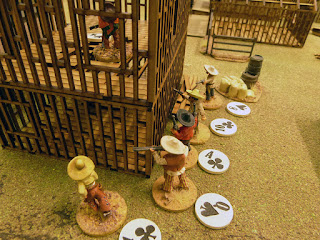 I decided to rush towards the Red Dog Saloon where Simon's posse were holed up, in the hope of getting some lucky shots in and dropping some deputies, Simon obliged by coming my way, meanwhile Johnny, the other lawman, was moving along the street taking cover behind a nearby hearse and a stalled wagon on Main Street. My gringo compadres at the other end of the street seemed to be keeping as far away from trouble as they could, Ryan turned up, took command of his men, and despite some Hollywood type diving and ducking found at the end of it he was out of range. No one was having much luck as bullets flew and hit wood, nothing or dirt, even a point blank shotgun blast managed to miss a wily Mexican. 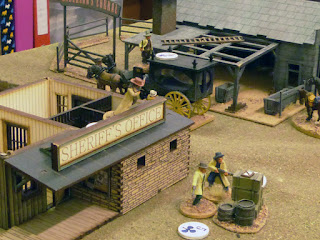 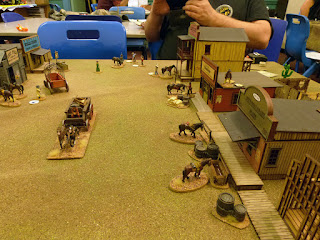 That however soon came to an end as Simon's men found the range, my boys were falling like dominoes to the great delight of Andy for some reason, we put the fallen in Boot Hill cemetery and it seemed to have a very large Mexican section. 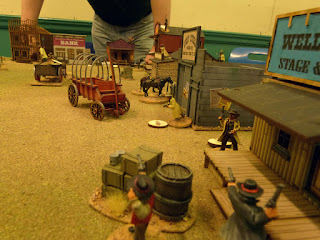 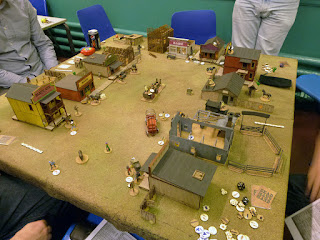 The Spider himself went down, as we called time I only had one man left who wasn't going to make the Big Nerve Test if we had managed another round. Ryan too lost a few men while Andy was relatively unscathed despite Johnny moving his fashion conscious deputies in their matching long coats into close range.

Time ran away with us but we all enjoyed the game and the Law easily got a win on casualties inflicted, I think in the end they would also have managed to clean out the town if the game had gone on.

So, I have my army for Sunday, I am all packed, I am also taking my son's army down for him and a few extra troops for a mate, I feel like I need a little break so I am looking forward to this jaunt, I am also heading off early tomorrow to hopefully beat the traffic and possibly be at the school to pick up my granddaughter who has asked her parents to make an effort and feed me 'Scottish' food.

I now have the rest of the day to redo a couple of bases, type out my list, amend a couple of maps (grrrrr) and still get to the pub at 3.30. Oh, and I have also bought some more stuff for Bolt Action, another M3 for the British and a Hanomag for the Germans (the one with the rockets on the side) and a couple of stowage sets, another couple of trucks for each side should see to my transport needs.

I am now going off grid until next week.
Posted by George Anderson at 10:52