After my little break I am busier than ever, I have four map projects on the go all fairly large, one with over fifty maps and I have some new models to build along with four German riflemen in greatcoats to paint. Why greatcoats, why not, just like the kilted Scotsman at a wedding, every time you see newsreels of German troops there always seems to be one with a greatcoat on so as I needed a few spare guys I got greatcoats, pssst wannae buy a watch. 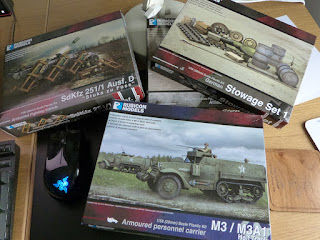 Club night and it was X-Wing, easy night for me, one light box. Simon had put together a scenario which involved his Gozanti cruiser which was carrying four new 'rides' for Lord Vader, Kath Scarlet (me) had been paid to escort the cruiser, we had to get to a jump off beacon to make hyper space. The Rebels of course were going to try and stop us and embarrass the Empire by destroying the cruisers cargo, four Advanced Tie's, if they had to be launched I would command two and Simon two. 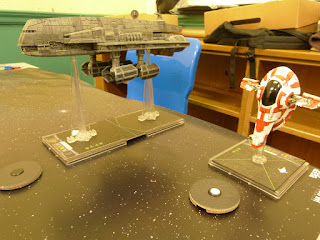 We made our way on to the table which was full of asteroids along with three minefields but Scarlet found herself on the wrong side of the cruiser and had to put her foot down in order to get in front and engage the enemy, always with a backward glance to ensure the cruiser did not run her down. Ryan had two B-Wings and two X-Wings, Andy had four X-Wings, however they came on fairly cautiously at first, apart from Biggs Darklighter who rushed forward and found himself in the path of the Gozanti, bang, one down. 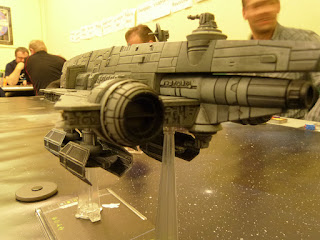 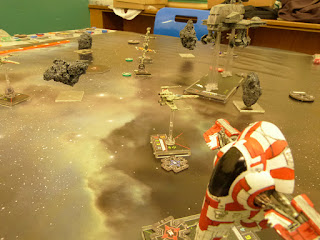 Now the B-Wings found the range and began to hammer the cruiser, with her shields failing and her return fire having no effect the captain told the Tie pilots to get ready to escape, Kath meanwhile was duelling with the Rebels and sent another X-Wing spinning into the great beyond.

The Ties now fled the mothership and just in time as she blew up spectacularly, however by now the Imperials were all within a good fast run of the beacon, fight or run? We chose to run. The Rebels threw caution to the wind and hurtled past the asteroids and into the minefields in order to catch us, long range shots whistled past as one after another the Ties disappeared into hyperspace. Kath also decided discretion was the better part of valour and with her shields down made the jump. One Tie was unlucky and fell to Rebel firepower. 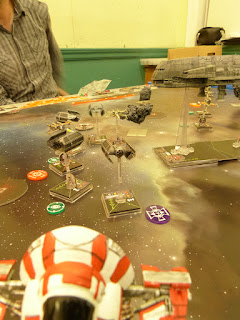 As we whisked through hyperspace we were all hoping that Lord Vader would only be slightly miffed with the loss of one of his prized starships while Kath checked with online banking that the money had gone into her account.

A very good scenario, and a lucky escape I think for the Imperials, due to some mis-communication the Rebels concentrated on killing the mothership rather than think of denying us the beacon, I don't think we would be so lucky next time. The Gozanti model with the under slung Ties looked really nice and it is a large ship which is easily used in a table top game.

A nice surprise at the club was the purchase of ten pre-painted MDF buildings kindly built by Dan for WWII, they came from Empires at War, we have also ordered several mats from Deep Cut Studios and also recently bought hills and trees, so we are doing very well on the terrain front. 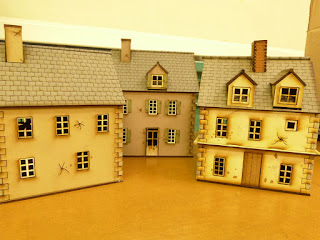 Posted by George Anderson at 09:43