The Smooth with the Rough

I got up this morning with a ton of stuff to see to, I had a haircut booked for 09:30 but as I was up early I thought I would get a start on some maps. The monitors failed to come on, so I jiggled, poked and bashed the case and got them up, then I Googled the problem and took the advice of some eight year old from YouTube and got Windows to try and sort the problem, until Windows can change a flat on the car I won't trust it to repair anything again, sure enough I got nowhere "Windows cannot fix the fault". By this time the woman arrived to cut my hair, fuming, I sat through the ordeal. As soon as it was over I phoned the computer guy at the end of the road and asked to bring it up, it resides there now. I am almost sure it is flashed up and sending out rays sitting on his desk and he is shaking his head that the idiot at the Post Office has bothered him again. Oh, and I had the Dentist at 3.00pm, grrrrrr.

Right, the Goth cavalry and the figures for my Strategy Intervention Points are finished and very swish they look too, the former at least, I am unsure whether I will add another unit as I am beginning to think the Huns will be my go to horsemen for this army as they are more likely to be used by Aetius than Goths. 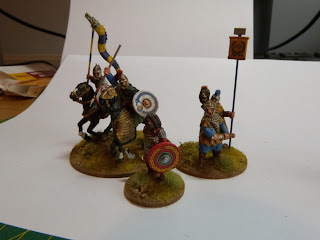 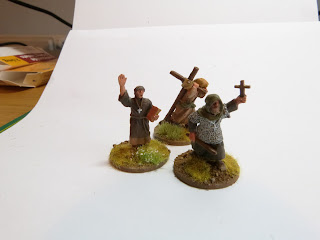 I started my non-Noble Hun cavalry a few days ago and they are lucky they are not all in the bin. The figures are very nice and the smaller horses will look like steppe ponies next to the large Goth mounts, perfect, but the bin you ask. Well the figures come in two parts in the main and are either lancers or bowmen, but you then get everything else separate, shields, bows, quivers, lassos, swords, heads, blankets, cuddly toy. I am far too clumsy to stick this stuff together and I have no patience, some of the stuff simply would not bond, well not with the other metal but it had no problem sticking to my fingers. This is one reason I will not go near plastic figures, too many parts, so at the end of the day, well two days I had a unit ready for painting, they had the barest minimum of equipment needed for the battlefield, the rest now sits in a big bag.

Now do not get the wrong impression here, the figures are Aventine and they are lovely and the examples on their site with all the paraphernalia are a wonder, you can really go to town with these figures but the building is simply not for me, I am happy to put a shield and spear on the guy, the rest I will leave to the sculptor.

I have to say a big thank you to two gentlemen who have helped me out in the last couple of days completely out of the blue. The first is David Bickley from the Tales From GHQ  blog, David has recently built the Warbases Roman Villa and was instrumental in it being offered by Warbases, they told me at Vapnartak he has been hounding them to get one on the shelf. He got to work online and gathered mosaics to make his villa the real deal, do check it out, he picked up that I had bought one and offered a complete set of his mosaics through the post, how generous is that. My villa will be on the shelf for some time yet but these lovely decorations now sit with it, so thank you David. 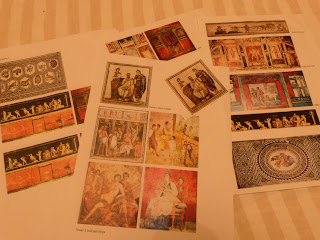 The second guy is Jim, I have no idea who Jim is or what he looks like, but he phoned the other day and said that he had seen me mapping and he had some books he was going to throw out and did I want them. Now usually when I get this kind of offer in the shop I turn it down flat, but he said they were battlefield guides so I thought no harm in looking at them. He turned up today with the books while I was having my haircut, so I still have no clue who he is as the missus didn't call me. 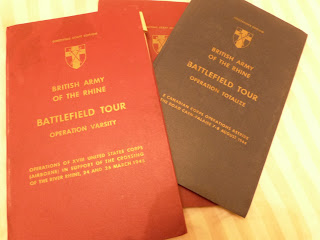 The guides however are superb, they are BAOR guides and the information contained within is priceless to anyone interested in warfare and cover the operations in Northwest Europe and elsewhere from the British point of view. I have drawn several maps of some of these operations for different books but should they be required in the future I am ahead of the pack. Thank you Jim.

Posted by George Anderson at 18:26