I Can See Light

I have just finished and based the first of two units of Huns for the Patricians. I cocked up and instead of priming the horses black, for some reason I stuck the riders on and primed them white, I recovered from this quite well and they were no harder to paint on the horses than off. When I come to do the nobles I think I shall prime horse and rider separate, then dry brush the horse before putting the rider on, I am not looking forward to glueing all the other bits together though. 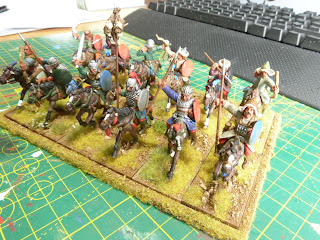 So I now have the Goth nobles on the tray and on their way, not hard figures to paint but there are 32 of them, after that the Hun nobles and then apart from the great Aetius himself and the Rally Point the army is done and dusted, easily 3,000 points worth. I then have to make a decision on whether to add one more Roman infantry unit for use as cheap cannon fodder i.e. Limitani or some Roman cavalry in order to swap between Patrician Roman and Late Roman, which to be honest is the very same thing apart from perhaps the use of Bucellarii. The reason I am tempted with this is that I would love an excuse to buy some of those gorgeous late Roman cavalry shield transfers from Little Big Man Studios.

I have decided to give myself a bit of a chore after the army is ready, I noticed when playing with my WWII stuff a week or so ago that there were some small chips on them and paint had been removed, just the odd little piece but that bothers me. I have therefore decided to fix the chips and give them all a coat of gloss varnish then a matt one to further protect them, as being skirmish figures they are handled much more than a large army on movement trays. It should not be that odious as I only have about 70 figures for each side, British and German. Then for the rest of the year I am going to be looking at tarting up my terrain and maybe adding a couple more buildings, especially a church for Normandy.

Right, maps to get on with today and then the Legion and I march for Lancaster this evening.

Posted by George Anderson at 09:28