My journey to Snaith in Yorkshire yesterday was dismal, motorway most of the way and constant rain and murk, surprisingly when I actually got to Snaith it was fairly mild, but of course wet. Snaith itself looks nice and it still has five pubs which is refreshing these days.

The small get together was being hosted by Michael and Simon of 1st Corps and Curteys Figures who, like the rest of this small band of brothers enjoy War and Conquest and are happy to supply prizes for our gaming weekends.

Due to the numbers it was decided to stick to the Dark Ages, Simon borrowed my Saxons, Michael had Romano-British, Trevor and Jenny had Vikings and Phil brought late Saxons, I had dithered about which army to bring but eventually settled on the Patrician Romans. I had made up two lists, one contained the fearsome(?) bolt shooters and the other more command, I went for the command in the end as I thought my Auxilia Legion would need some help for morale tests.

My first battle was against Simon, he had decided to use the Early Saxons which are pretty much a one shot army, they get good benefits in the first round of combat but will generally lose a long slog. Once deployment was complete I looked across the table and immediately thought my cavalry were in for a tough time as they were opposed by slingers and archers who outnumbered the Huns, it looked like Plan A was out of the window. I decided to lead with the Goths, hold the centre and see what transpired on my right.

Very shortly Simons shooting had sent my left flank skirmishers to the rear and he had broken my second unit of archers on my right by charging them, however they ran, rallied and in melee began eventually to beat the javelinmen, this was guaranteed when the second unit of archers joined the fray. Meanwhile the Goths were making heavy going of the broken ground to their front while also suffering from missiles, so much that the General himself fell riddled by shafts, my Magister Militum also took several wounds. The Huns however managed to save most of their hits and began at last to make an impact on the slingers, my Bucellarii charged the annoying archers and ran them down, this caused the Saxon cavalry which had formed into skirmish to test and they too ran to be run down in their turn, Simon's left had disappeared, could my infantry hold until the return of the Bucellarii.


The Goths cleared the terrain and smashed into their opposite numbers and quickly began to win the melee, now the rest of the Saxon infantry charged in. One Legion crumbled but the other two held firm and turned the tide on the enemy, within a turn only one Saxon unit was left untouched and the second was just about to be routed by the Goths, it was game over. Simon is an ancients player and he was unused to the way the Saxons fought and of all the Saxon choices the Early army is in my opinion the weakest.

My second game of the day was against Michael and his lovely Romano-British army. This time neither of the flanks looked like a good bet for my Bucellarii so I put them on the right and the Huns on the left, once again the infantry were to hold the centre, when the time was right I would throw the Goths in against the formidable battle line opposite me. My opening move was to send the Bucellarii to the left as Michael had Comitatus cavalry there and the Huns would not stand up to them. Within a short space I had destroyed all the British skirmish formations which meant on my right I could shoot with impunity into the enemy line and on my left I had two units unloading death on the Comitatus. Michael put his infantry into shieldwall, so I knew I had plenty of time to send the heavy cavalry to the left and if my archery did not finish the Comitatus my cavalry would.


Sure enough the Comitatus cavalry were dispersed, Michael now had no option but to come forward before my cavalry got behind him or on his flank, he did not fancy taking on the Goths but sent four other units into my Roman line. In War and Conquest because all these units overlapped it became one huge melee, the first time I have ever seen this on the table, the British failed to cause one casualty on my shieldwall while my boys dealt out ten. Michael needed snake eyes to stay in the fight, but they didn't turn up and most of his army turned and fled, once again it was game over.


With the loss of his skirmishers so early in the game Michael was on the back foot, especially where his cavalry was concerned, I was very careful to use the range of the bow to keep out of possible charge reach and even if he did I had enough room to get away, while the Bucellarii were riding to the rescue. To have almost forty attacks and not gain a single casualty was a cruel blow, I had lost three casualties during the whole battle. 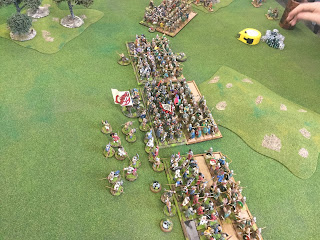 And there you have it, another great day for the Patricians, I love this army, it is an army for all seasons, and I will add one more Legion and Roman cavalry unit when I finish my other jobs. It was also a good day of fun and wargame chat, Michael and Simon were excellent hosts, we all got some speciality figures when we turned up, I got a Romano-British general and his standard bearer and at the end of the day I was given a large unit pack of their new Picts for winning my two games. We even managed a couple of pints at the pub a short distance away, I think a beer and a chat is a perfect end to a day's wargaming.
Posted by George Anderson at 09:01