The only camping I have ever done was on some American Civil War re-enactments as an historical necessity, I have never had the urge to do it for pleasure nor travel the wide open spaces in a camper van, I need a turn down service and a chocolate left on my pillow or it is no go.

I had some Roman tents sitting unwanted on one of my shelves since I had given up on Dux Britanniarum, one of which was a commanders tent and decided to give it a new lease of life on the War and Conquest battlefield. I looked around at 28mm camp equipment but in the end I could not find what I wanted so I dug into my Lead Box. I found a rack of spears and some grain sacks, there were plenty of shields and weapons lying about and I found a nice, large helmet which, if I cut the face off and placed it carefully, would look like someone had put it down for a moment but would be back. I swiftly put a small order into Footsore for suitable guard figures and got started.

I also scrounged a vexillium, I think it may be Aventine, not sure, but it has a soft spear shaft so I cut that off and replaced it with a strong, unbending, wire one, drilled a hole in the plasticard base and popped it in, the tent does belong to the chief after all. 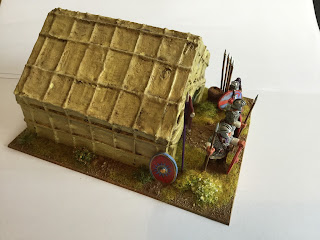 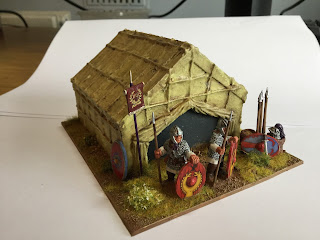 I managed to get a good couple of hours in on the Hun Nobles last night, will also manage the same tonight as I will be home alone. Looking at another week before they join the army. I am now fighting back the urge to get two more completely unnecessary units.

Below is a photograph of my worst camping experience, the weekend we decided to go all out for realism and sleep under a gum blanket was one with torrential rain every night, the pup tent on the second night was not much better and we ended up in the car at 3am. That's me in the foreground, when I eventually got to Nashville and a hot shower my body looked like it had been worked over by a gang of thugs. 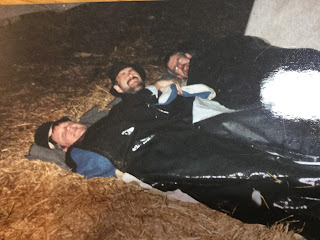 Posted by George Anderson at 09:24