I treated myself to a Seleucid war elephant, I intend to get two eventually but wanted to get started on the first model, I have no actual plan yet for the building of the new army apart from having to wait for the new cavalry. I do have an idea to get at least 2,000 to 2,500 points of core troops then add the rest as I go along but it is subject to whim so far.

Yes, the elephant, a lovely model from Aventine, I went for the traditional howdah along with armour and the lovely trunk which has grabbed a nearby soldier and hoisted him on high. I followed two tips, use a dusting of Bicarbonate of Soda with the superglue for the new Aventine metal, a light dusting is more than enough and paint the mahout and mount him before doing the howdah. The turret sat quite awkwardly so I folded some kitchen roll, lathered it in superglue and stuck it under the centre of the howdah and then sat it on the back of the elephant, this made the whole thing very stable, any suitable material would do. To decorate the base I used a couple of shields I had in a bag from bygone projects, a spare spear and a hollowed out Greek helmet along with the usual tufts. 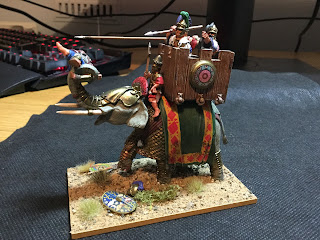 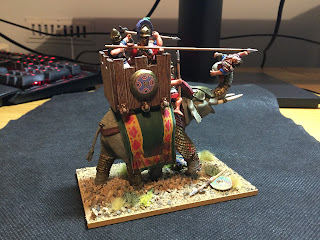 So, I am moving on to two skirmish units, more will be ordered up in a week or so, I am thinking more support troops, for some reason I feel like doing the phalanxes last, weird but there you go.

I popped down to Kevin's this afternoon for our Monday boardgame, Tricorne again and the Battle of Monmouth 1778. For this battle the winner had to get nine victory points, the British get two for every hex they held on Perrine Farm ridge, but if moved off the hex they would lose them. 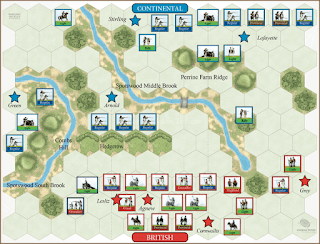 I managed to draw several Right Flank cards at the beginning and off I went for the ridge, I also managed to get up and take the hedge line in the centre, I did not want to do anything with my left. I was doing very well at first and American casualties mounted, however, twice Kevin drew a rally card which meant he made good all his losses, as the battle unfolded I too now began to take casualties. For several moves I had to use all the cards I could to keep the attack going in, this was difficult as most of my hand allowed me to attack on the left, not the right and my centre sat around making tea.

Eventually I did manage to get my boys on to the ridge and luckily it was the Highlanders, these brave troops fought back every assault thrown at them, and there were plenty as the American commander became desperate to win back the ridge. I now decided to use those Left Flank cards and successfully threw back the American right, why didn't I do this before?

As the last Continental assaults failed I held enough of the ridge to declare victory, well done the Jocks. How did we ever lose this war, it seems very difficult for the Americans to win a battle, so far the British are usually concentrated while the Rebels have units way back from the front line, even with some good cards Kevin could not stop my attack. It seems that during the game you can get an attack started but keeping it going becomes the hard part, you can usually manage to move something but not in a coordinated fashion. We are going to try something else next week for a change, tomorrow it is Wings of War again at the club and on Thursday I am looking at a Dark Age scenario based on the battle of Nechtansmere from my scenario booklet.
Posted by George Anderson at 20:28