On the field of battle by early Spring is now becoming a reality as I plunge forward with my new army, the other night I finished my fifth unit out of a possible total of around sixteen for the full monty or bifter as we Scots say, or we do on the West Coast. I should definitely have enough to take a small selection to the club for a game, around 2,000 points.

In order to have something to paint over the festive season in case I finish the Skythians, which I should manage, I have ordered up a pike phalanx and some officers. I intend this phalanx to be a 'normal' phalanx so it will in the main have the linen armour with the front rank only in metal. I don't know a lot about these armies but from what I have read I tend towards the rear ranks not having armour, Aventine do have some unarmoured pikemen but the rest are so nice I have decided the guard/elite phalanxes will have mainly metal armour while the others will have mainly linen.

I have just added a unit of Thorakitai which will operate on the flanks of the phalanx, these were quite different to the phalanx but able to fight in a like manner if called upon, they were armoured and carried a large oval shield along with either javelins or a long spear or possibly both. Although wearing armour they were especially adept at exploiting rough terrain, they were very close to the Thureophoroi as a troop type, my plan is to use them along with Thracians and Thureophoroi with cavalry support to protect my flanks or possibly destroy enemy flanks. For the time being they are a small unit of sixteen, depending on my experience on the field they might be given the opportunity to upgrade to twenty-four. 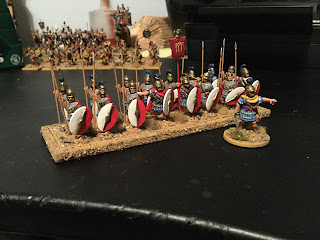 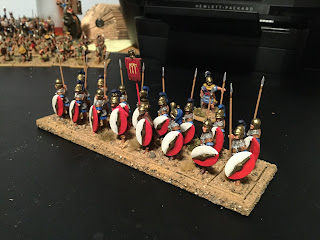 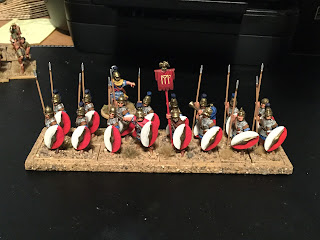 My granddaughter is here for the weekend and I was dragged into Lancaster for some Christmas shopping, not much as we have already got most of what we want online. It was dreadful, the car parks were like Wacky Races, it was cold, damp, crowded, not a nice way to spend an afternoon. So I decided to put a smile on my face slipped into Waterstones and got a new Batman novel, I know I could have got it online cheaper, but I feel now and again I have to support a bookshop, even Waterstones (the only one within 100 miles). I also OD'd on liquorice which is not good for me but I love, novelties, Zouts, and cartwheels along with some Nanny State 0.5% and very salty peanuts (also not good for me) for binging Netflix's The Punisher. The cartwheels in the market were 12 for £1 but so far I have had 15 in one pack and 13 in the other, result. 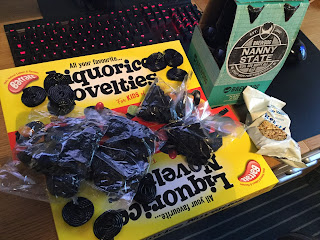 Kevin is busy this week so no Monday boardgame, our weekly game may also have to wait until next Saturday instead of Thursday. I should be at the club this Tuesday but no idea yet what I am doing. I have completed severalinteresting map projects and having got my feet dry I am once again off to the trenches for another sixteen maps. 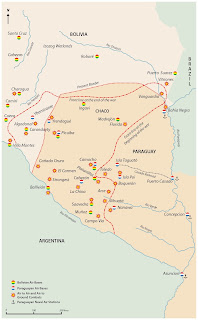 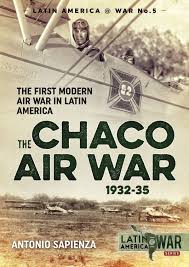 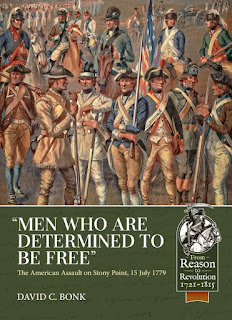 Posted by George Anderson at 12:34