Mate Simon has fixed my broken PC and put the blame on the last people to touch it, that was the original firm, but as with putting my car into a service I have no idea what happens to it, but it has cost me dear and I have probably spent a lot of money for no need.

Anyway we turned up at the club as Andy was putting on a WWII Battlegroup game, as things happened I, along with Ian, was German while Simon and Rob were British and American. The scenario had been taken from some other WWII rules, basically we had to attack along a narrow frontage to take the Sorn bridge while it was being held by some dug in American paratroops, British armour was on the way, Market Garden, or a part of it.  We had a half decent little Kampfgruppe with three Panthers and some Grenadiers, but the paras were elite and in cover, as soon as I saw it I knew this was going to be hard or even impossible, just like the real thing. 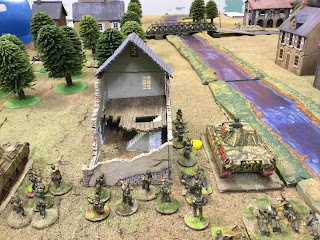 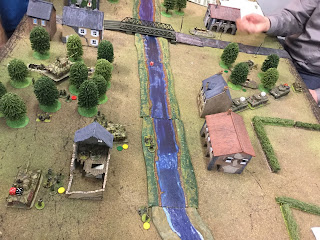 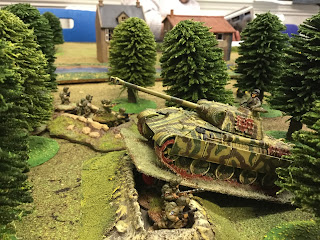 In Battlegroup you roll a number of dice which, added to how many officers you have, gives you the number of chits you can use to order your force about, not a favourite mechanic of mine as you will know by now. Sure enough due to low die rolls we never had enough chits to bring in all our forces or coordinate a proper attack while the other side were throwing their surplus in the bin. We took a lot of suppressing fire which made things worse, especially from a small 50mm mortar firing over open sights, we had 80mm mortars but required a spotter who for some reason had to stay with the HQ rather than creep forward for some juicy targets. As we found out it took three chits to fire the mortars and the way things were going that was half our funds, and even when we did get it in it was rather underwhelming.

We did manage to kick the paras on our side of the river out of their foxholes but as the British armour had now turned up our tanks could no longer support the infantry, many of mine were still languishing at the start point. We took a Cromwell out but were never going to get to the bridge, as time was called it was an Allied victory. Not a bad set of rules for a quick game and it may be realistic with troops having a hard time going forward but it is frustrating, you get suppressed but then cannot unsuppress until the end of the move, which normally means the unit gets suppressed again! I think the scenario was small scale and the rules are for much larger forces. Perhaps Bolt Action or some such would have been better. Elsewhere we had some RPG set in 17C France and a Kings of War game, not my cuppa but some beautiful brushwork by Ryan on the figures. 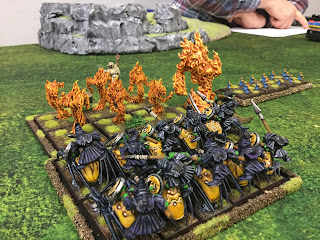 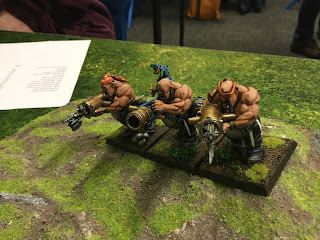 As I said in my last post I have been trying to clear the decks over the past week, I have lots of map work on and have had to give extra hours to the Battle of Dresden project (30+ maps) then get ready for sixteen maps for a WWI book next week, I have managed this, just, so I should possibly not have organised a game with Kevin today, but I did. I managed to check the army list five minutes before Kevin rang the doorbell.

We were doing a Greek City States match up, I went for cheap Citizen Hoplites for numbers with only one elite unit, support was two cavalry units, skirmishers and a Hill Tribes warband. Kevin had Trained Hoplites and one elite and the same kind of support. Kevin had to deploy first, so as I looked at the battlefield I thought I would advance my left, hold back the right and advance aggressively with the centre, my idea being not to go into phalanx but race for the hills, thinking that being on the hill would counterbalance Kevin's units in phalanx, mmmm.


I managed to sweep away his right but then kind of lost the plot as I left my elite unit and the heavy cavalry without moving them for a full move, the battle on the hills was that intense, this was not my only cock up. I got to the hills and was hoping to form phalanx on them and stand like a stone wall, but no, Kevin got a charge in first and it was here my second stupid mistake happened, I forgot my men had 'extra armour' so I fought that round without it, aaaargh! I didn't win one melee, having said I mucked up Kevin caused so many casualties on me I doubt it would have helped, only in one fight might it have mattered, and only might.

As my boys on the hills were beaten I did manage at last to galvanise my elites who took out a small Peltast unit which had steadfastly refused to simply die the first time I hit them, rallied off table and came back, my warband had the honour of defeating their larger opponents but it was all over as the last unit on the hill broke and dispersed. Yes, I could and maybe should have gone into phalanx before taking the hills but that wasn't the plan and if we had had two hoplite lines clashing I think we might have got a result by next Thursday. Kudos to Kevin for a good win and I hope I sharpen up for this weekend, I am taking the Twelfth to fight Successors, EIR and Celts while my Romano-British will be up against Anglo-Saxons, I haven't fought early Romans before so that will be an interesting match up, also the objective system will be used, not simply a stand up battle which of course is what I like. I might sneak in one more map tonight, despite the pressure I am enjoying drawing these, then I better give some thought to the army lists for the weekend. 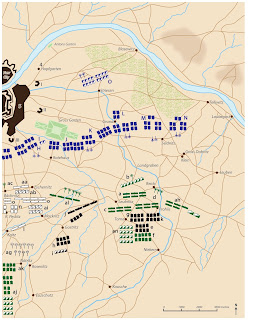 Posted by George Anderson at 19:39