An exciting day for both myself and Kevin, at 3,000 points I could get all sorts of Seleucid goodies to see how the army worked, I took a chance and brought an elephant and a scythed chariot, the latter because I have one and what's the point of that if you do not use it now and again. The rest of the army consisted of four phalanxes, one levy which I would use as a reserve/flank guard, then some skirmishers, horse archers, cavalry and my new Mercenary Peltasts which I hoped would do great things. Kevin brought his new Republican Romans with four units of heavy infantry supported by a Gallic warband, some Numidian infantry and cavalry along with a horde of skirmish units.

As we deployed unit by unit I suddenly felt quite vulnerable as I expected to be overwhelmed by the enemy skirmish line, so to this end I kept the chariot and elephant in reserve and deliberately decided to attack the Roman archers while ignoring the javelin armed Velites, if I managed this I could then move up the elephant and chariot with the intention of hitting the enemy right flank. On my right I pushed forward my own javelins and the peltasts hoping that the Numidians would not be able to stand up to the mercenaries, my phalanxes were simply to hold their ground.


The game started very well for the Seleucids as they won the initiative (and were to do so for most of the game) and launched a missile barrage which very soon either wiped out the enemy archers or caused them to run for the rear, putting them out of action for most of the game. On my right the mercenaries chased away the archers and cavalry, they would rally but again this gave me a lot of leeway on that flank. Kevin's Velites now approached my line but for some reason could not hit a barn door and got too close to my phalanx, the chariot and a phalanx put paid to the rash wolfskins. Kevin was having no luck at all except bad luck.


I managed to get the elephant to charge the warband in the flank and rout it, this left my cavalry free to roam behind the enemy line keeping the returning skirmishers away from damaging my 'tank'. My mercenaries after clearing out the enemy light troops now charged uphill into the Numidians, an easy fight for them thought I, but no, the Numidians fought like tigers and routed my uninspiring mercenaries. This did not turn into a disaster thankfully as I sent my Levy phalanx to take on the victorious Numidians and it routed them in short order, the flank was safe again. 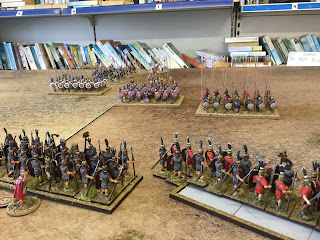 My phalanxes had begun to slowly move forward by now, and Kevin had moved some of his infantry to guard his right flank, this gave me an opportunity to loose the chariot and the elephant into them as once again I won the initiative. Another Roman unit routed and dispersed. A second Roman block had moved forward and I charged it, it now also had a phalanx on its flank and an elephant to its rear, Kevin decided enough was enough and conceded. 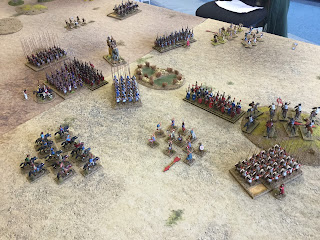 A remarkable battle where the heavy infantry of both sides hardly took part until near the end, I had managed to keep my elephant alive and use the chariot to good effect, this would have been much harder had I not took out or chased away the enemy archers. I am not going to get overconfident about this as both units can easily be countered at other times. I was a bit surprised the Roman infantry held off as long as they did but it worked in my favour. I am not completely at ease with this army yet, the flanks usually look very vulnerable, or at least one of them always seems to be particularly weak, however it worked very well today.

Posted by George Anderson at 18:15