I am in the Doldrums at the moment, I always find coming down from the excitement of a wargame weekend away a bit of a bind as I enjoy them so much, new armies, new people, good games and usually a social evening discussing rules, armies, tactics and battles long gone with like minded folks. Anyway I didn't make it to the club, Rob was going to organise a Colonial bash which I always enjoy but he had to work, so I took the opportunity to get on with a couple of important map projects.

I had a Dark Age game organised for the Sunday last weekend and didn't manage it due to the weather but I really wanted to get my Romano-British onto the table so I asked Kevin if he fancied a Dark Age clash this week. I wanted to test out the army I had chosen for the gaming weekend so Kevin would be the Saxons, he was kind of dropped into it as he had not played the army before and only made his list up when he arrived at my door before we started.

I had a typical army with a couple of elite units, some average troops, a Frankish (yes, them again) warband and a few skirmishers, I had no cavalry. Kevin lined up almost the same, his warband were Picts and he had a small unit of cavalry, I noted his surprise when he saw no horsemen on my side of the battlefield. There were two steep hills in the centre of the table which would disorder Regular troops, I decided to sit a couple of units on the one nearest to me and concentrate on the enemy flanks, if the Saxons went for my centre both of us would be disordered but I would be uphill. The battle was fairly straightforward and I managed to win on both flanks, Kevin was therefore forced to charge off his small hill but I had moved up to the base of it in preparation for this therefore his men fought at a disadvantage as my men, not being on the hill, were not disordered. At this point it became obvious that the Saxons, having lost several units were now at a serious disadvantage, therefore Kevin offered his sword. The Franks, were at first held then pushed back by the Picts and I thought here we go again, but in a titanic effort they turned the tables on the Jocks and sent them packing, a big surprise to me but vindication for my continuing faith in them.

A decent game if not overly exciting, but then Dark Age clashes between armies very similar in make up do not have the same cut and thrust as Ancient armies with their myriad troops types, but they have their own charm and I have fought many which were desperate struggles for both sides.

I have caught up with my painting and with the arrival of the shield transfers and bases managed to finish my Mercenary Peltasts, I then moved on to my command figures. I decided after much soul searching and online research to go to Wargames Foundry for my King and used one of their Alexander figures, the horse of course has a skin of some kind on it and as I have a tiger with my 2i/c I decided on a leopard (I hope PETA don't find out). I didn't realise there were so many different leopards, so I went with Persian, more a creamy colour than orange, I am just waiting of course for 'that guy' to point out it is not orange enough. I have also primed my second scythed chariot so that is next, all the units left now to get are extras, so no hurry although I am sure I won't slow down. 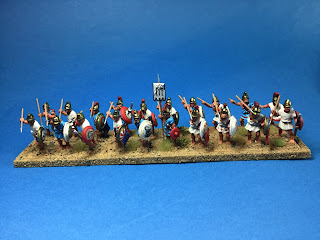 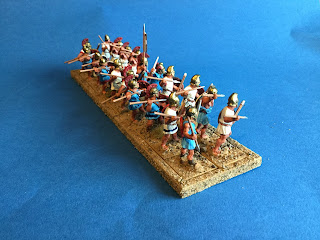 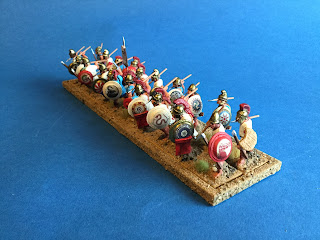 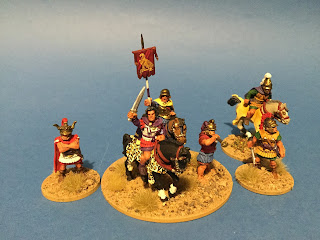 My wargamers OCD has kicked in again, I have a habit of extending the ranks of my Cohorts but don't have enough single figures in the units to make it easy, I decided after last weekend to do something about it. Yesterday I took all six Legionary and Auxilia cohorts and rebased the rear ranks. I also made my mind up to rebase all my skirmishers in the five armies to 25mm instead of 20mm square bases, I am still at it while I type, the glue is drying on the Patrician skirmishers. I have to live with the Dark Age skirmishers remaining on 20mm bases, I attempted to take one off and it was a nightmare, I am not doing two armies worth and possibly ruin the figures in the process by breaking bows and javelins. I could however get the new, very thin, plywood bases from Warbases and simply sit them on and build them up, mmmmm.
Posted by George Anderson at 11:18