Setback for the Republic

Kevin and I managed to catch up today for a War and Conquest game, it seems a long time but it hasn't really although I have managed a couple of new units since we did play. Kevin again brought his Republican Romans and it was a proper heavy infantry army which appeared, there were still quite a few skirmish units but the overall look was wall to wall legionaries. I decided to use my new units and took an elephant because I feel I have to with a Seleucid army, I had three skirmish units, one being cavalry, and hoped these would protect my fragile peltasts while they advanced and attacked the Roman flanks. My heavy infantry consisted of two phalanxes backed up by Mercenary Hoplites and Galatians. 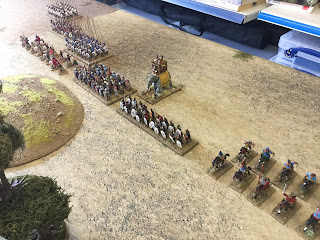 My plan was to hit the Roman right and then swing around on the main line, to this end I echeloned my infantry on the right and would hold them back until I felt it was time to push them forward, the Romans merely wanted to do what Romans do and come straight forward and engage me. I had a Forlorn Hope way over on my right which I hoped would tackle all the enemy light troops on that flank and still be able to join the main battle, I was asking a lot of those guys.

The battle started well for me and it looked like both Roman flanks were in trouble, however they recovered and I lost all my skirmishers which left my Thracians and Peltasts without protection, thankfully Kevin could not turn this to his advantage although it did frighten me for a time. It was now that one of the Roman cohorts charged uphill at my Galatians only to meet their doom as the warriors fought magnificently, then to my alarm their pursuit put them into the path of another cohort, they managed to beat this one too. Every time I managed to get the elephant into position for a flank charge the enemy routed.


The battle was now reaching its climax, the legionaries were close enough to charge my infantry, I won the initiative and seeing that the Roman right was about to crumble I threw every unit I had into a charge, including the very patient elephant, Kevin's line disintegrated. It was all over, we shook hands.


My Galatians were the men of the match but all the other troops performed well while Kevin's army had a bad day. I thought I was in trouble having lost all my skirmish troops but as it turned out I managed to recover, especially with the Peltasts on my right, who took a chance and turned their backs on their tormentors and managed to get onto the flank of the enemy heavy infantry. I was a bit miffed that I did not get my Thracians into action as I had armed them with the Rhomphaia and wanted to see how it performed, but they kept the right flank skirmishers from enveloping me and possibly targeting the elephant. I was very pleased the way the army had performed however the one opposite was threatened with eBay!
Posted by George Anderson at 21:49