Desperation in the Desert

Rob turned up at the club last night and kindly brought his Sudan Colonial troops and an exciting scenario. The British governor and his wife, Lady Black, the mother of Lord George Black, a family which now pops up in most of our turn of the century shenanigans, it's a long story and I digress. The couple were caught up in a Mahdist uprising and protected by some Egyptian sappers who were ensconced in a hastily fortified village along with a small artillery piece, while the enemy swarmed about getting up the courage to attack. Luckily a British relief column was approaching but would they be in time?

I had the left wing brigade while Simon commanded the right, Ian took the main Mahdist force near the village while Rob made mysterious die rolls each move and warned that dust clouds could be seen behind the British forces. I decided to move as quickly as possible and take a nearby hill which had enemy cannon on it and infantry sheltering behind, I ignored the cries of dust to the rear as it didn't seem to be getting closer, my first moves went well but then my command rolls became atrocious and I could only order forward at best two units. This did not stop me assaulting the hill and wiping out the gun crews and spiking the guns with the Derbyshires, but I couldn't get any further. Rob, with his last remaining throw and needing only a 1, smiled and and brought on the Mahdist cavalry, it managed to destroy my camelry and cavalry but was stopped dead by my Highlanders, as my line settled the surviving cavalry turned on Simon.


I wasn't the only one with command problems, the initial Mahdist attack on the village went in piecemeal as the huge mass of the enemy left refused to move, the valiant sappers and the little gun were heroic behind their defences. Although the attacks failed they had inflicted casualties on the defenders and if only the enemy could coordinate their attacks it might have been game over for the defenders, but time after time the mass refused to move or became disordered and could not move. The British poured in an annoying amount of fire into the horde which further gave them pause.


However the defenders were eventually wiped out and only one or two along with the Governor, his missus and the little gun were left barricading their refuge, incredibly the Mahdists still could not bring themselves to attack. I could not get the bulk of my brigade to move but Simon eventually, having chased away the enemy cavalry, reorganised and began his advance on the village. The clock struck ten and the game was over, Rob called a British victory although without the confusion in the Mahdists ranks it would have been a very different story. I believe the Mahdist left flank commander was executed as their forces withdrew. An excellent game and a stirring defence against the odds by the sappers, if it had been British troops then several VC's would have been won.

Next week I am trying Gangs of Rome with Julian, he has some beautiful scenery which he has been collecting for this, I saw some last night, very impressive. I have been hitting Paypal again, this time I bought some Thracians and two bolt shooters to add to the Seleucids, this leaves Mercenary hoplites on my list, and of course the elusive cavalry which are still not ready at Aventine, but I'll wait. I have painted up my second unit of javelinmen, probably not required but they were in the drawer, by the time I finish these I should have at least one of the above orders.

I finished my second scythed chariot last week, again not really required but it was in the drawer so here it is. 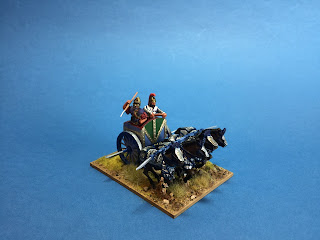 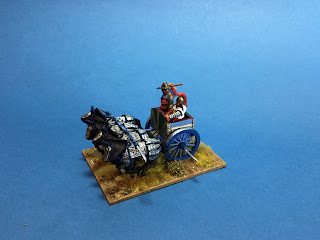 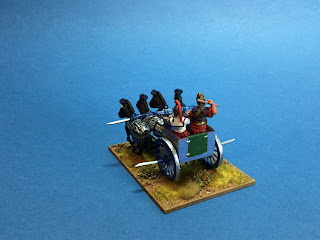 Posted by George Anderson at 13:20