I was on my own again for the club meet last night and had not managed to sort anything out, I could join a tryout of 'What a Tanker' from Too Fat Lardies, despite being a rough Jack Tar and North Sea Tiger in my day the childish play on words annoys me for some reason, I digress, the second game was Shadespire a fantasy game based on GW's Age of Sigmar world. I had read a review of WaT on a blog and it reinforced my prejudices about TFL rule sets so I jumped for Shadespire.

Julian took time to explain everything to me and the gameplay revolves around cards, objective cards and 'ploy' cards which you use to gather gold tokens, the winner is the one at the end of three turns who has the most tokens, even though his gang may be all dead. I took a bunch of Orks, Julian Chaos and when Ryan arrived he brought Skeletons, a canny player at Shadespire is Ryan. As the game kicked off the objectives I needed were firmly in enemy territory and my chance of getting there pretty slim, so I thought I would just kill stuff, Julian's stuff. 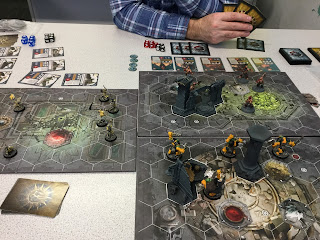 Despite my efforts I got nowhere, my objectives were out of reach and my cards pretty much useless to my fighters, oh and I might as well mention my dice luck here, it was bad. Both Ryan and Julian ended the game with eleven gold tokens, I had three. I ducked out of the second game as it was not my thing and you couldn't possibly learn much in one play so I left the lads to get one decent game in before closing time.

I wandered over to see how the Tankies were getting on, it was a Sherman and a Stuart vs a PzIV and PzIII, two and a half hours into the game and not one had been taken out, I believe at that point the PzIII had just made it's first hit (no damage). I did manage to catch the Stuart circling the PzIV at one point while the panzer tried desperately to get into position for a shot. I think I dodged one there. 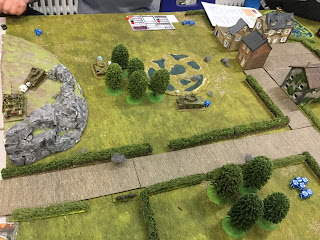 A bit of a red letter day last week, a friend sent me some pictures of his latest work and along with them was a picture of a new Aventine Miniatures Successor general with two Galatian bodyguards, both Gary and I are fans of Aventine and have a lot of their figures (two armies in my case). I messaged Keith at Aventine to ask for his advice about late Hoplite figures I wanted to add to the army and mentioned the lovely Galatians and that no one made Galatians and therefore Gauls had to be recruited to serve instead. He asked me to wait and five minutes later having talked to Adam, the sculptor, said they would do figures for a Galatian unit, how is that for service. The new cavalry will also be out by the time I finish the mercenary Hoplites, my cup it runneth over.


Mate Julian very kindly made up a wet palette for me some time ago and I used it but then went back to my plastic palette as I ran out of paper or something just as daft. But the idea has stayed with me and I went to buy a commercial one but found them too big, now a company called Red Grass Games has produced a small version which should be perfect for me. Even though I am almost at the end of my Seleucids I do have other paint related things to do.

Posted by George Anderson at 10:36