I am home alone this week as I might have mentioned, busy trying to stay alive until SHE gets back, according to her of course I am lost without her. It's Moroccan salmon with spicy cous-cous tonight, and not out of a tin, take that.

At a loose end on Tuesday night as Simon was D&D'ing I heard that Stuart was bringing the new Star Wars Legion so asked if I could join in, Stuart was pleased as I was the only one who had asked. I went in a bit late to find everything set up, a small battlefield to get introduced to the rules with three squads a side, albeit the Imperials had two speeder bikes. Stuart said he was not impressed with some of the figures but I thought the ones on the table looked fine, my opponent was Roger so Stuart umpired.

The game is from Fantasy Flight Games and is immediately recognised as such, if you have played X-Wing then you are half way there, you get a squad and can then build it up by adding various pieces of equipment or extra men, there are shed loads of nice cards for this and no doubt shed loads more on the way, FFG like to coin in the cash. There is a nifty scenario builder with cards, one for the deployment, one for the mission and one with effects i.e. fog, you take it in turns to lift a card until you end up with three which are the game you will play. That's the game in a nutshell but of course there are almost endless variances on troops and missions and again more will be added, no doubt a campaign system as well.

(It is a Thursday morning and still the customers have not stopped coming in, hold on)

In this game I had to get into a base through a large door in the corner, we had ten minutes of mirth on how it would be done in a Star Wars movie with one or two people being able to sneak past several divisions of Stormtroopers, my three squads were going to have a much harder time getting across the open ground to the door. The game is quite deadly and as one of my squads was reduced to one man in the first fusillade I had throw everything I know about the Star Wars universe out the window, Stuart told us the Stormtroopers were really good shots! And here was me thinking they would need at least three sixes for a hit. I did not get anywhere near the door, I did manage to shoot down both speeder bikes but that was it, Plan A had not worked. 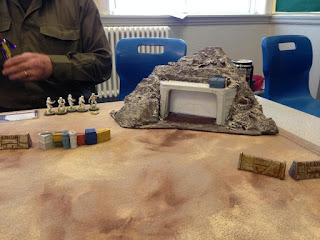 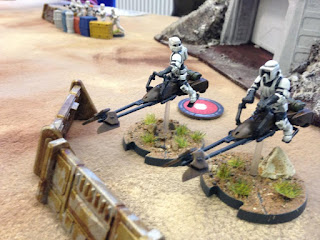 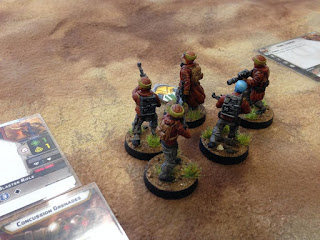 The second game was much bigger and involved a lot more troops along with very nice small walkers and one of their larger cousins, the small ones were particularly nice models. This time there was a lot more terrain and we had to pick up markers, whoever had the most won. Luke and Vader were in on this game and both dealt out quite a bit of damage, Vader to a Landspeeder and Luke to the ill fated speederbikes who again bit the dust. As I said above before I was interrupted in mid flow by yet another customer, the shooting is quite brutal, you through a combination of coloured dice depending on who you are and the weapons you are using. You then save with certain coloured dice, usually white if you are cannon fodder or red if anybody important, I used a lot of white and had to check a few times as they all seemed to be blank when I threw them. As the clock struck ten I had two tokens and Roger none, the late hour must have had an effect on Stuart as he declared a draw, my cannon fodder had died for nothing. 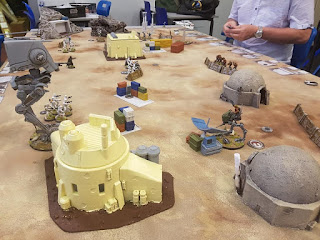 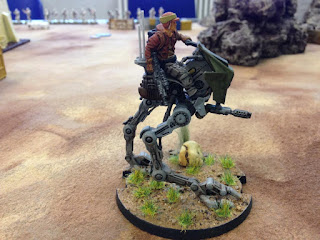 So, what did I think, the game is fine for a club night and a bit of fun, it plays very quickly and is easy to pick up, like X-Wing there is a depth to the game by studying the cards and choosing the right load outs for your men, but you would need to spend some time on that part of it. Stuart as is his want has loads of stuff for the game, all the extras and it was good of him to bring it along and umpire. Stuart has a 3D printer and a lot of his terrain pieces and buildings he printed off himself. 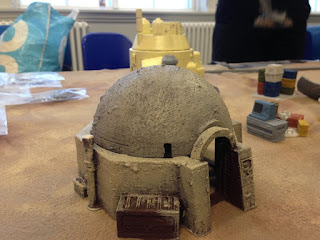 I received a nice bundle of stuff from the Postie the other day, the first of my SYW project. The Front Rank infantry are superb, they are very clean and crisp with minimum cleaning up to do and the GMB flags are excellent, nice and big with vibrant colours. I have now primed and started to paint the figures, my only concern is how I will manage the lace buttonholes and the edgings. Some buttonhole lace has two colours and I have seen this painted on in examples, I suspect I might not be able to do this due to my eyesight so may keep away from battalions with many colours. The drummers are especially dandified and the 33rd's has a white coat instead of the normal red, so some challenging painting coming up. 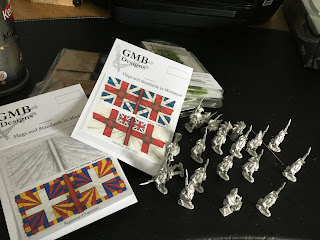 The flood of customers has now dried up, fingers crossed I make it until Noon.
Posted by George Anderson at 10:34