The Battle of Yeah But

Kevin came up yesterday for our Thursday afternoon bash, back to War and Conquest after Bolt Action last week. I was looking forward to this battle and had decided to completely change my tactics, this time I was going to attack the enemy centre not go for the flanks. To do this I took two veteran phalanxes, two elephants and some light units to watch my flanks, I also went overboard with four skirmish units when I normally use at most three. The enemy, Carthaginians, had the usual solid line of hoplite style infantry, a warband and more skirmishers than me but in smaller units, as they deployed I had not altered my thoughts about going for the centre. The terrain suited me as well as it closed the field of battle down and was more friendly to me than Kevin, my flanks should be fine. 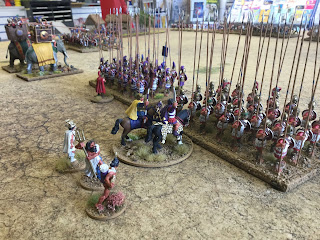 I advanced my left and centre while moving my right back towards the phalanxes to better protect them, I threw my skirmishers forward and although they took heavy casualties on the left they stood their ground and eventually drove off the enemy. No one shot at the elephants so again job done. On the right the enemy fell back from my large skirmish unit which effectively took up the attention of three Carthaginians skirmish units, thus keeping them from my battle line.


I had planned to smash the two elephants into the Gallic warband but it sidestepped them and I mucked up my attack so only the Thracians went in minus pachyderm support, this unit looked smart in their black tunics and white shields armed with the dangerous rhomphaia, this was their first test, and it was disastrous, they fled back to Thrace with me cursing them all the way, but this now took the warband away from the clash in the centre and I could turn an elephant on them.


Meanwhile my phalanxes had hit the Carthaginian centre and I lost my momentum, the African infantry are incredibly hard to budge and although the Purple phalanx kept winning their opponents would not break, my top phalanx the Whites had an even tougher fight and it swung both for and against them, I even managed to throw my mercenary peltasts into the fight but still got nowhere and eventually Italian spearmen joined in so a real slaughter ensued with no one giving in.

My elephants had dispersed the Carthaginian cavalry and had now hit the warband and a unit of Numidians and knocked them both back, the Purple phalanx had vanquished their foes and my Thorakitai were about to be charged by Italian Hoplites, the Whites and Mercenaries held on by the skin of their teeth, and ................ that was it, we had to stop.


This is usually the part where each player gives his account "Yeah but" of how the battle would have ended, but at the point we had reached it was balanced on a knife edge too close to call. Neither of us seemed to be as concentrated as we usually are, several rules were missed which could have swung combats one way or the other, my head particularly had turned to jelly, and time had run away from us. Kevin had to call it a day in the end and return to HQ, so a frustrating end to a vicious struggle.

I do wonder if the author of the Carthaginian list had a touch of 'Hannibal Fever' which causes you to forget that the army won because it was led by one of the most successful of Ancient generals not because it was simply unbeatable which leads to coming up with an army which is damn hard to beat on the tabletop, even when not led by Hannibal or his alter ego. I have found this akin to "Rommel Fever" and even the more general "German Fever" or dare I say it "Roman Fever" although obviously it is correct in this form (tongue is in cheek), I am sure there are others. I have only a cursory knowledge of the Carthaginians but their fighting capabilities in WAC seem a tad overpowered. Maybe chariots and elephants will do it next time.
Posted by George Anderson at 10:16