I have just finished basing up my first cavalry for the Seven Years War project, naturally they were British and just as night follows day they are Scots.

The figures are Wargames Foundry, I went for these because Front Rank don't do an officer in a mitre nor a standard bearer, unless my eyes are worse than I think they are. The horses are a decent fit against FR but the figures are a bit chunkier, although I don't think this will be too noticeable in the fog of war. As nice are FR are I do admit to liking the dashing poses of these troopers, which leaves me with the difficult choice of do I get more? 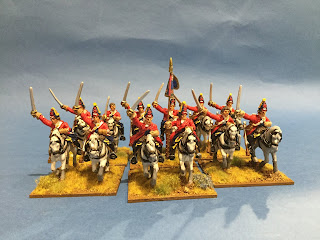 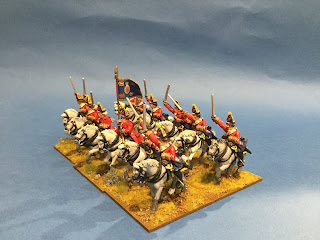 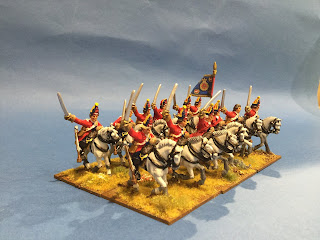 These figures represent as best as possible the 2nd (Royal North British) Dragoons (Scots Greys), I say this because no one could possibly make a SYW range with all the little nuances of uniform and equipment which abound in this period, especially for the cavalry. The main colours of the regiment are there as are the grenadier caps, also the flag is authentic, other pieces I fitted in as I could, for instance the yellow line should be a twin line but that is beyond me these days, even in 28mm.

I really mucked up the flag, the first I put on upside down and had to cut off (£1.75 down the drain), I also took if for granted the flagpole would have a blade and tassels, so the end was left blunt. Although some cavalry flags are shown with tassels or cravats (French) the majority do not seem to have them, also the infantry tassels which I bought are far to long to be of use. I could not ruin my last flag to put it on a spearpoint so I had to cut a point from elsewhere and stick it on, which is why it looks a tad out of place, I also have no idea why the bottom of the flagpole looks the way it does.

Having said all that I am quite chuffed with the unit and it does look like it means business, the French Royal Rousillon regiment is on the tray, primed and ready. I like the look of the twelve cavalrymen but I might do the odd regiment as eight, cheaper and quicker to get on the table.

Bolt Action has been firing me up recently, great games a few months ago with Matt and a good game the week before at the club, so I am heading to the Russian Steppes tomorrow night against Simon's Russians. Simon nearly always brings along his KV1 but I am loathe to pay points for a big cat, be it a Panther or a Tiger (don't have one at the moment but it is on my list, near the top) to confront it. I therefore bring along a Marder or maybe a Hetzer but I am now looking at what else the Germans have in their armoury, specifically the Sdkfz 251/22 which is a Hanomag with a PAK40 welded to it (something else on the list). I am also looking at some close support in the form of a 251/9, again a halftrack but with a 75mm howitzer onboard this time. What about the Allies I hear you shout, well they didn't really need to improvise the way the Germans did, however I am going to get them a Firefly so they don't feel left out. When, not sure, probably after Christmas to give me a rest from painting SYW.
Posted by George Anderson at 20:19