It is almost Christmas and my Birthday, so despite the 'we are too old for presents' clause in my marital contract, don't panic, this doesn't kick in until your hair starts growing inward instead of outward i.e. nose and ears, I am going to do well this year. I am off to the Indigo at the O2 Arena to see the Dualers actually on my birthday, I thought I had booked it but her indoors is adamant she did, so I caved, I shall be accompanied by my sons so another plus. I also decided to get myself something or more specifically things. I have it on the best of authorities that a Brexit No Deal will not harm the fabled Anderson Map Fortune which is fairly comfortable at the moment, despite Mark "We're all doomed" Carney at the Bank of England, so hence the spending spree.

First up was a bunch of paints to replenish my stock and make sure I have enough to continue with the SYW project, I was also toying with another paint pot stack for the extra bottles I have in a box, but that can wait.

I have been kind of fired up with Bolt Action at the moment so have ordered up an M5 Stuart light tank for the British to use in a recce roll, on the opposite side I have at last gone for the Puma armoured car. As there were only about 100 of these built I felt I could not just pop one on the table, however I have learnt that three panzer divisions in Normandy had them and as my Germans are loosely based on one of them (2nd Panzer) I ordered it up. Experience on the BA tabletop against Simon's Russians has also caused me to review my troops, I need something to deal with dug in or hidden snipers and flamethrowers, something not as expensive as a real tank as our club games tend to be under 1,000 points, so I have gone for the 'Stummel' or Stumpy, an upgraded halftrack with a short barreled 75mm howitzer bolted to it, this will be very dangerous to enemy infantry. I was looking at the 75mm PAK version but it was not present in Normandy as far as I know not coming into service until late '44. Also on the plus side is the fact these kits will be a nice interlude between battalions of SYW figures.


I put some time aside to paint up my flock of sheep courtesy of 1st Corps, you may have seen them appear on tables covering all sorts of periods, they are an inspired piece of casting. Please no wellie or Welsh jokes, the former is daft and the latter a hate crime, you have been warned. 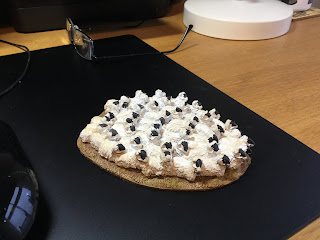 Posted by George Anderson at 10:53