I am still not 100% and what with feeling sorry for myself I have not touched a paintbrush in about two weeks, the 51st glower at me from the side of the keyboard and plead for their redcoats, I really must get back to my almost automatic one hour a night routine.

I have been unable to call a halt to maps though, and despite my heart not being in it I manfully continued, finishing three projects and starting another, the maps which I am working on at the moment are time consuming and complex, I intend to break the back of this project next week, so nose to the grindstone.


I went to Darlington early this morning for some X-Wing, a pleasant enough drive if boring. I would be playing son Stewart who is simply too good for me at this game, when fighting him I rely on luck while he has things worked out to perfection (or almost). I don't think I have ever beat him at X-Wing so thankfully on real battlefields I can recover some of my dignity.

The first game involved a Lambda Shuttle for me escorted by two Tie Advanced against a Firespray and two Fang fighters. As the game kicked off I got some bad hits on my ships and thought 'here we go'. The game then settled down and the Shuttle dealt out a lot of damage, one Fang Fighter went down and the Firespray limped around in the dogfight, I lost both my Tie's but if I could hold on against the next bout of incoming fire there was a chance I could kill the Firespray and that would leave only the Fang Fighter and I was quite confident the Shuttle might come out on top. Sadly she took a critical hit which meant my one remaining hull point was taken in the next move, game over. 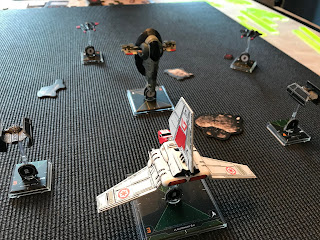 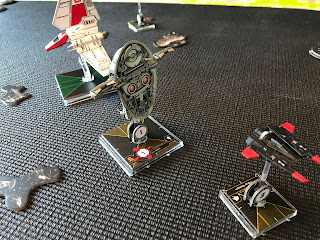 I was quite chuffed I had given Stewart a run for his money, the Lambda used to be fairly useless as once the enemy got on her tail it was all over, now however she has a rear arc from which to fire, not as good as the front arc but enough to annoy anyone following.

The second game was Imperial v Imperial, I took two Tie Interceptors and a Tie Phantom, the enemy had a Tie Defender (why didn't I take one of them), a Tie Fighter and Darth Vader in his Tie Advanced. Looking across the table I did not get a good feeling about the upcoming dogfight. I thought I might knock out the bog standard Tie and then have three ships v two, not going to happen. I completely mucked up the flying of the Phantom and it proved useless to me, my Interceptors did get into a good position at first but couldn't hit a barn door, Stewart on the other hand hardly missed, my glass starfighters popped one after the other.


I did not do enough preparation and only looked at my squads last night as I lay in bed wanting to be asleep and not building squads, Stewart had worked on his for days. My own fault, preparation pays in this game and I view it mainly as a pick up game which is wrong, way wrong. I did pick up some things and learned others which I was hoping would be the case when fighting Stewart. Overall I was quite pleased with the first game but I was totally taken apart in the second.

I am not going to the club on Tuesday, the week after next I believe it is Bolt Action and I am looking forward to that.
Posted by George Anderson at 17:37