2019 Figures and a fright for Napoleon

I won't bore you with the details of my ills over the festive season, suffice to say I am 95% back to normal and I already have three bookings at the Docs to kick the year off. I have now finished my French cavalry, I did not manage to base them last year so they are the first to be completed this year. They are the Royal Roussillon regiment dressed in a nice blue with red trimmings, they were supposed to wear a cuirasse but trying to get figures to correspond to all the uniform variations is impossible, thankfully it does say that they wore their tan waistcoat over the cuirasse at times so that was fine by me. I am now going to cut my cavalry regiments down to eight figures, I may still do the odd twelve man but I want to cut down on painting and expense. 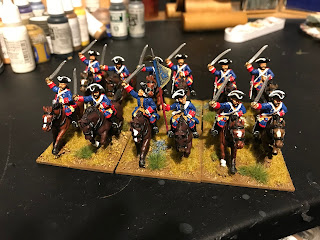 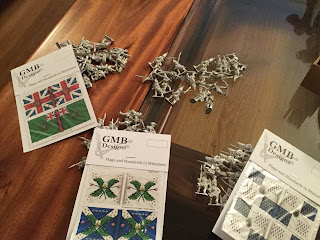 I bit the bullet and ordered up my next four infantry battalions, this should keep me painting until Easter as I am away for most of March. I have the 51st Foot and Grenadiers for the British also Grenadiers for the French and how could I resist the Royal Ecossais, beautiful flags.

My 2019 wargaming has started well, I went along yesterday to Grange-over-Sands, the posh bit of Cumbria, to join in a game organised by Rob and Stuart, the period was Napoleonic and the rules Black Powder. I have had my moans about BP before (mainly the command rules) but have still enjoyed taking part in games at the club, having got the rule book to perhaps use for the Seven Years War I actually read them before going. There is more to the rules than I had at first thought and you can alleviate command problems by use of higher officers and keeping your units under control, you can still be very unlucky as well but then that happens no matter which rules you use. Taking more of an interest in the rules and not leaving it all to poor Rob gave me a more satisfying game.

It was September 1813 and an Austro-Russian force had stole a march on the French and appeared in their rear, the French in the immediate area had to hold back the Allies, they received reinforcements  as the danger became apparent. We had a small meeting of commanders and decided that Andy (Austrians) would pressure the French right and prevent them interfering in the centre, my two divisions along with some cavalry would assault a small village upon which the French defence relied while Stuart on my right would hold off the mass of French cavalry bearing down on him and hopefully stop them sweeping into my flank. I knew the built up area would be a problem but it looked like I could overwhelm its supports in a series of nearby fields and then concentrate on the defenders, elite Swiss and Wurtemburgers.


Andy surprised me by ferociously attacking his opposite number, Charlie, his first assaults were not successful but his efforts meant the French right never looked like moving to succour their centre, which was good news for me. I advanced aggressively into the fields and soon swept them clear of the enemy, this took a bit of time due to the terrain and was a bit frustrating for my troops. I couldn't do much with my artillery due to my advance but I did put some on a nearby hill to my left and they did some nice work annoying the nearest French, they also later inflicted grievous harm on an attempt by some French cavalry to burst through my lines. I kept my cavalry in the rear and their officer sadly interpreted this as staying in the rear no matter his later orders, so I had trouble moving him as everyone else was up near the village. I slowly but surely got into position to assault the village.

Meanwhile Stuart on the right seemed to be doing well against the waves of French cavalry, when I looked back he was in disarry and under a lot of pressure, I could not help as I was now committed to fight in the village My first regiment went at the walls and suffered, however its morale held and as the fight went on the numbers began to tell against the Swiss defenders, in time a "Huzzah" was heard and a Russian flag could be seen atop the main building. I had now maneuvered more men to attack the village from the left, the same thing happened, although they took a beating at first again the Russian morale held and again the end result found the French allies running for the rear after bitter hand to hand combat.


As I took stock of the carnage in the village it was evident lady luck had deserted the French, the Allies all across the battlefield sensed victory and they could not be stopped as they completed the rout of the French centre. Stuart had now turned the tables on the French cavalry and his men also surged forward. At the last minute my own cavalry charged and swept away a brave attempt by some French cavalry to do something other than die as the Austrian and Russian forces bore down on them.

So there you have it, an Allied victory at the eleventh hour. Certainly in the final turn the Russians could seem to do no wrong and their die rolling was superb while the French on the other hand were dismal. Andy had kept Charlie busy, Stuart had just managed to hold off the French cavalry and then turned the tables with a last minute attack, my boys had fought very well, while their morale had been exceptional, I must make room on my jacket for even more medals. A very good game and a great way to spend a miserable Sunday afternoon, big thanks to everyone especially the organisers Rob and Stuart.

No rule set is perfect and if they work for you then they work, these worked for me, it was a big battle, we had some great moments and we got a result in five hours. Also I did not have a headache which used to happen back in the day when I tried Napoleonics. There is leeway in the movement system and this is perhaps the biggest thing to get your head around as nearly every other ruleset demands rigid moves, it is not as if there are no limitations, but again it works as designed.

Oh and it seemed that as the Russians were 'Stubborn' or some such they were allowed to reroll one failed save, this became known as a "Dodgski" and it saved Stuart and I multiple times during the course of the game, it also caused a great deal of laughter.

Posted by George Anderson at 09:32