In Training for the big day

I was going to give the club a miss last night but at the eleventh hour Rob said I could take part in a 28mm Napoleonic game, it had grown from 2v2 to 3v3, so what the hell, I popped along. Rob and Julian are taking part in the Great Game in Glasgow next month which is a huge refight of Waterloo with something like 40+ players and 22,000 figures, the rules are Black Powder with amendments. So the game last night was to try out the amendments so that Rob and Julian could get to know them.

For his part Julian is taking a French Guard unit and it is lovely, it still has to be based and I am sure will be even more impressive when this is complete, Rob has Dutch troops, I did not get a close look at these as I was at the opposite end of the table but they also looked good in their serried ranks. For the game I was on the side of the bad guys, the French, and was given one of Julian's units, I was on the extreme left flank and was opposed by Andy's British Guards drawn up at the foot of a hill and more occupying a large building on the crest. These were also supported by a host of riflemen, enough to make Sharpe jealous. 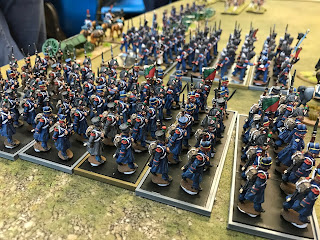 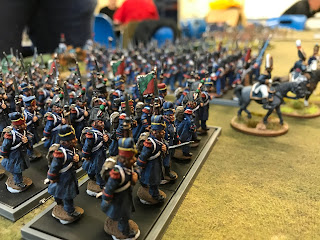 As the game kicked off I decided simply to launch my guys at the hill, they did not seem too keen to do this however and it took some persuading to get them to move into charge reach, my battery of guns meanwhile targeted the English at the foot of the hill. Julian also moved cautiously on the village to his front while bringing his guns around to cover the gap between his men and mine. On the right Paul went straight at the enemy and a large fight raged through the fields to the left of the village.


I managed at last to charge and knocked back the Guards and got a foothold on the hill, as the fight progressed I eventually managed, just, to get them to fall back behind the house, the forward slope was mine, I was just about to throw caution to the wind and ignore the shouted advice of those around me and assault the building when darkness fell. Julian had assaulted the village and also cleared out some of the skirmishers to his front, over on the right Paul and Stuart were still trading blows with no sure winner emerging.


The game was quite confused as we had Stuart on Version 1 (granted not a huge difference from 2), and some of us on Version 2 while Rob was also trying to work in the new amendments. I know on the day there are a host of umpires to keep the game moving but I do wonder how smoothly it will go with the numbers involved, Black Powder was designed for big games but this will be a real test. As the game used 28mm figures it also gave me a hint of what to expect when I get my own 28mm SYW armies out to play, I think I shall get that other table tennis table.

No club next week as I have to attend a meeting with the missus, I am getting the impression however that my wargaming has not really taken off yet this year and we are over a third of the way through, frightening at my age. I have missed a few club nights and apart from my recent weekend home games are just not happening. I looked around for local or localish Bolt Action players/tournaments only to find that as usual not much seems to happen north of Watford and despite social media it tends to be unsocial when looking for wargame opponents, or you get the 'love to play but I live in Lancaster Pennsylvania' nonsense.

Right, some soldiers to paint and I expect more map work this afternoon.
Posted by George Anderson at 11:00