I just about gave up on cinemas years ago due to people, yakking, crisp bags, popcorn tubs, mobile phones and generally no thought for anyone else in the theatre, which was a shame as I still have that childish delight of watching something on the big screen in the dark.

I was quite prepared to wait for Dunkirk but all the bumf talked of the screaming sirens and the overwhelming sound of battle so it had to be the big screen, besides, the missus wanted to see it. So on Sunday afternoon off we toddled, despite my reputation I was really hoping to enjoy the movie.

Once our hero, or one of our heroes, managed to jump over the barricade I thought it all went a bit flat. Christopher Nolan does not like CGI seemingly but the film was crying out for it, not to overwhelm the experience but to bring the devastation of a defeated army to life. There was the odd truck and AA gun around and the whole thing was understated, I have seen busier beaches in Brighton when the sun comes out. 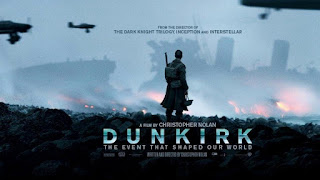 I was also puzzled why the RAF would be flying at 2,000ft across the channel when my memory recalls them fighting further inland and much higher, as you do in a fighter, trying to stop the Luftwaffe getting through. The only bit of the film I have to admit which engaged my interest was when 'Jock' couldn't get the canopy of his downed Spitfire open, I was happy Nolan didn't let him sink. As for the rest of the aerial action, well, have a look at this from The Eternal Zero.

I wasn't going to hold Nolan to ransom over historical accuracy because I know there are limitations and he has a much larger audience than a know it all wargamer to please and he may well have done that, but I am now going to search out the John Mills movie as even now it is presumed superior.

So overall I thought the movie uninteresting and flat, but that's just me, but so did the missus, the defence rests M'lud.

Oh, and the French were mentioned, several times, so they can keep schtum, and it is a British movie after all, and the other nonsense that the Imperial forces were ignored, considering there were, to the best of my knowledge, only two mule teams on the beach from the sub-continent, so what, perhaps they were way over in that last line heading into the sea and the racist reviewer just didn't see them. Dear me.

Posted by George Anderson at 17:02