Two of our members here at Lancaster took part in what was described as the largest wargame ever (in 28mm), Rob for the Allies and Julian for the French, both put in a lot of time, effort and expense to take part in the extravaganza, including a trip to foreign parts north of Hadrian's Wall. Rob was holding around the village of Papelotte where he was credited with delaying the French until the Prussians turned up, he lost five of his twelve battalions doing so.

I have the honour of contributing to George’s Blog as a Guest contributor to talk about how I came to be involved in the recent Epic refight of Waterloo held at Glasgow University on 15/16 June 2019.


It is strange how quirks of fate set you on an unknown course of action. The local train service from rural Cumbria to Lancaster is to say the least erratic and with a tendency to cancel with no notice. To ensure you are able to get to a Hospital appointment in time, you normally catch a much earlier train. However it does leave you window shopping in Lancaster City Centre, not my favourite past time! So I picked up a wargames magazine in W H Smith and settled down in a coffee shop to read and kill time. I then stumbled onto an article by Dr Tony Pollard, Professor of Conflict History and Archaeology at Glasgow University. In wargaming circles, best known for his TV programme with Neil Oliver Two Men in A Trench. 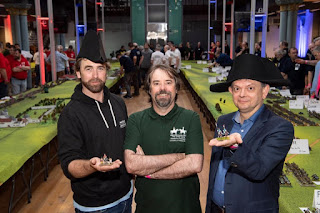 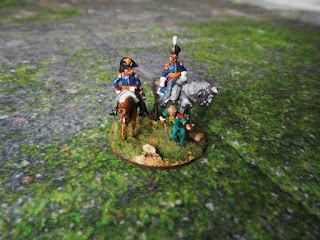 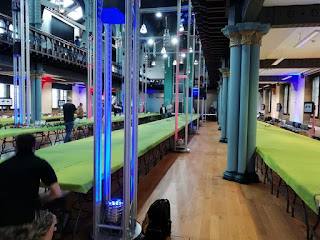 The article was talking about the work His Archaeology team was doing on the Waterloo Battlefield but in particular the way the Archaeology was being used as Therapy for Veterans with PTSD. It went on to tell how they had accidentally started painting wargames figures in the evenings and discovered its therapeutic benefits not only to stressed soldiers but also to stressed out Archaeologists! It ended with a massively stupid ambition, to refight the battle of Waterloo in 28mm scale at a ratio of 1figure = 6 men. This would mean about 22,000 figures on the table Then, I hurried off to my appointment.

But a seed had been sown and in June 2018, the call went out for volunteers to provide units for the refight which was rapidly moving from an ambition to a reality. It scared the hell out of me to discover that each battalion would be made up of 72 figures and I would need to provide three battalions. My painting skills are OK but 220 Infantry figures would be madness!! For four days I dithered and hesitated and then discovered that the Commands were being snapped up. I thought this event is unlikely to ever happen again and it would be an excuse to build that 28mm Napoleonic army that I have always wanted. I Jumped ….and  agreed to take the role of  Prince Bernhard of Saxe-Weimar the 23 year old commander of the 2nd Nassau Brigade of the 2nd Netherlands Division.

A year later and I have two huge boxes containing 3/2 Nassau Regiment, 1/28th and 2/28th Orange Nassau Regiments and a battery of Dutch artillery and I am carrying them into the Kelvin Gallery, the scene of the Two day refight….and I am one of over a hundred players and umpires who have donated to the Waterloo uncovered Charity, bought Polo Shirts and Dice and an army that most finished painting in the week before the battle. I am also clutching Black Powder 2 , the chosen ruleset.


The hall had four  tables which were about 80’ long and 6’ wide. the forces were placed in their historic positions at 1100 on 18th June 1815. The wargamers took the role of Brigade commanders and each Brigade had four regiments. The Brigadier provided three and a second wargamer provided the fourth regiment. The Divisional Commander was a forces veteran, usually with little wargaming experience and the wargamers role was to guide them in their decision making. That was the plan anyway! The commanders of the 2nd Netherlands Division came from Holland, Australia, the UK and Cumbria! 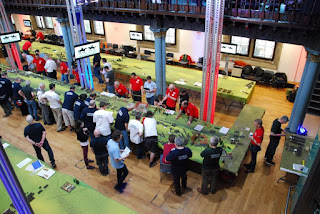 At the same time that the battle was raging on the main floor the galleries above had historical re enactors’, participation games, Archaeological displays  and a very big Warlord Games presence so that public visitors had other things to do than spot the bald heads of most of the players 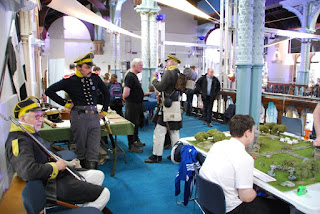 It was a marvllous experience, truly epic in scale and ambition. It was fantastic to meet so many wargamers from so many countries. It also raised  money for a very worthy Charity. I am so grateful that I stopped dithering last June and jumped. 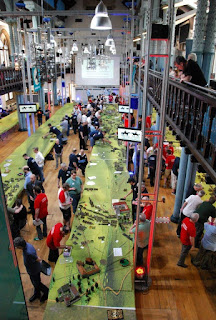 Red Polo shirts were the Allied commanders. Blue the French, Green the Prussians, White the Umpires (many of whom had flown in from Australia) and Light Blue the support staff who were mainly students from the University acting as war correspondents .
Posted by George Anderson at 09:10