I was supposed to go to my sons for dinner today but the weather is atrocious so we cancelled, just as well as a leak has developed in my bedroom right above the bed, the water is coming down from the light. I have checked and it is only a small drip, perhaps worse because we have had constant rain now for about nine hours and it is coming from the opposite direction it usually does, more nagging headache, try getting a roofer out to sort a small leak by perhaps moving a couple of tiles.

Anyway on the bright side I have managed to finish the second of my French grenadier battalions. I am not giving up on the SYW but I did say it was not a priority and it would be long term. 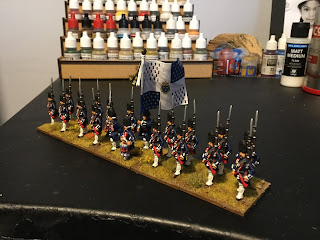 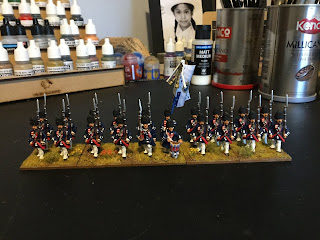 I perhaps have foolishly decided to add the Soviets to my WWII forces and to this end ordered up four infantry squads yesterday. I am aiming to get enough troops and supports at first to play the Chain of Command Konigsberg mini campaign, where German troops are trying for a breakout from the Courland pocket in 1945. A few months ago I had already thought about Soviets for Bolt Action and ordered up the paints required, just in case.

Posted by George Anderson at 12:27