Club night been and gone, now sweltering and hiding from the sun, must look out those melon, pineapple and pau pau seeds I bought forty years ago when warned about the climate getting warmer.

Chain of Command, 13th May, 1940, ten past one, close to the river Meuse, a French force tries to delay the tsumani of field grey heading west, for a few hours at least. I had a normal infantry platoon supported by a Renault R35, 25mm anti-tank gun, an adjutant and some Francs Tireurs to throw a spanner into the German plan. Stuart brought infantry with a SdKfz 222 armoured car, an extra squad and an infantry gun. 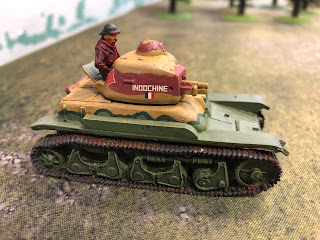 I deployed quickly enough and took possession of a house on my left and the cornfield on my right, planning to build up a base of fire to which I added my little tank and grenade launcher squad. I had wanted my last squad also on the left but a Shabby Nazi Trick befuddled them and they refused to come on. Stuart also took over a house near the front line on my right and the rest of his men deployed in a wood some distance from their objective. I played my Francs Tireurs who proved utterly useless and whom the Boche simply ignored, I also threw a vast amount of firepower at the squad in the nearby house and again this proved utterly useless, my little tank joining in the farce. 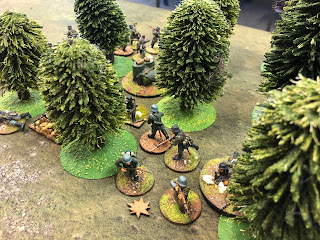 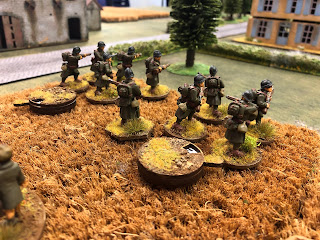 As we both very slowly collected shock and the odd casualty I tried to withdraw my lead squad in the cornfield but they broke anyway and my morale fell to 8 from 10. Stuart meanwhile with the clock counting down threw caution to the wind and tried to send a squad towards the centre of the small hamlet. The French gleefully cut these men down with no mercy, German morale started to plummet. 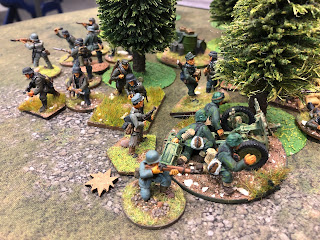 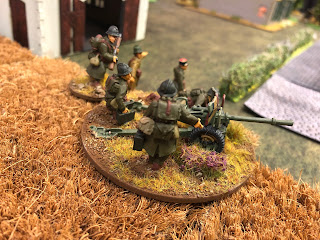 The Germans in the wood also began to suffer and another team bolted for the rear, in the dying moments Stuart brought on his armoured car but it hid from the anti-tank gun and sadly achieved nothing. As the Boche morale hit 5 it was obvious the objective was never going to fall into their hands so we called a halt. 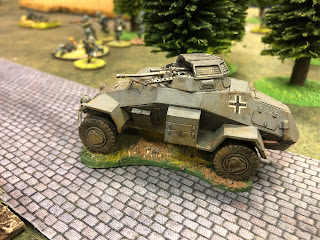 Although I did eventually get my third squad on the table I made a mistake putting it on the left when it would have been far more effective on the right, I made the same mistake with my Senior Leader compounded by the fact I could have sent his mate across to the right instead of simply relying on getting the right command dice. I also committed the cardinal sin of getting fixated on the Germans in the house close to my right. Once again CoC showed the way to play is in the context of a small campaign, one off games are fine for learning the ropes but can at times give a less than exciting game.

Its been nine days now since I ordered up some cavalry and bits and pieces from Casting Room Miniatures and no sign yet of anything on the way, which is unusual in my dealings with Foundry. Anyway not having a reserve of patience last night I ordered up some Steel Fist cavalry, only to notice after paying that they are on holiday and not back until the 14th, aaargh!

No big deal, I have an Italian pike block to finish before looking at cavalry and I still have my granddaughter here until Sunday so allied with the mini heatwave I cannot see me painting much until Monday. I have managed the front ranks of the Italians and have the middle ranks and command on the tray, these are TAG models and nice in their own way, very easy to paint but these seem to be overburdened with armour to me for bog standard infantry. Steel Fist are working on Swiss, they would probably do for the start of the wars but not for the later period, they do look good however and I am sure some placed here and there would not look amiss for the mid period. Although I have Swiss in French service I do intend to do an actual Swiss unit at some point. 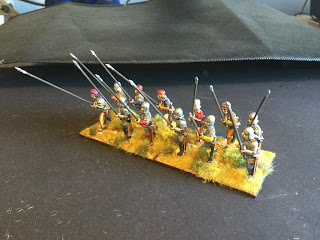 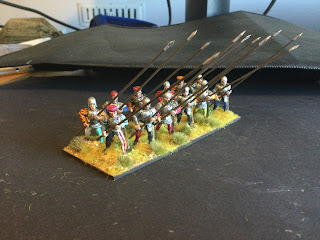 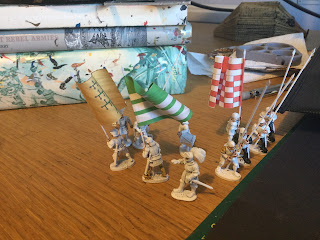 I have nothing to say about entertainment for now, I have had to sit through Spy Kids 2 and 3 with my granddaughter, and yes, the movie was not made for me, but will these kids look back in their dotage and laugh and go all misty eyed when remembering such rubbish. I have just had an attack of this with "The Buccaneers" starring Robert Shaw as reformed pirate Dan Tempest, I loved this and apart from Bill and Ben and Four Feather Falls etc. it was one of my first TV memories. I have just bought the whole series on DVD (well I think so, it may be a 3" floppy) for £4.90 in a moment of weakness and nostalgia. More anon. 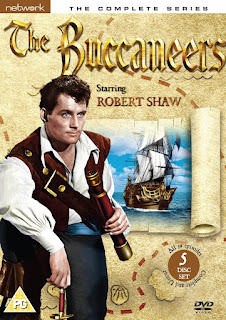 Posted by George Anderson at 17:01