After all my deliberations and anguish I am now fully committed to a Soviet WWII 'army'. I have just this morning completed three squads another is half painted ready for some brushwork this afternoon as it is a miserably wet and cold day. The fourth squad is there as back up or to provide the odd figure for support squads. Chain of Command being possibly the only WWII set which requires five man crews for MMG's and guns etc. instead of three, in fact if you add a Junior Leader you need six men for the crew. 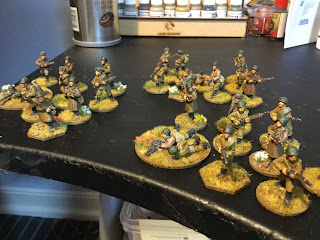 I also ordered up all my infantry support troops last week and they are now cleaned, primed and ready to go. I also got a bunch of Characters from Artizan and these are really lovely, eight in all and the only one which is naff is someone who looks like a despatch rider or something akin to one in a pose which is just useless, the others will be used for those extra men above or leaders. The actual weapons and crews are Warlord and again really nice figures which fit in fine with Artizan, I did have a devil of a time with the heavy machine gun as the shield just didn't want to fit so I resorted to my hobby knife. Why do my fingers turn into sausages when I want to glue intricate parts of a model? 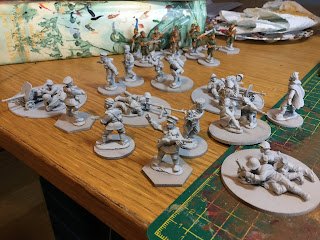 I will probably add a second Anti-tank rifle and sniper at a later stage, I went for the Bad Squiddo female sniper and have to say I was disappointed, not in the casting which is fine but even if they are properly sized women they do look very small compared to the rest of my troops, but then again Artizan are rather large and chunky which I personally like, not matter I am stuck with them, perhaps they will be harder to spot.

Although I find all WWII troops easier to paint than Ancients or certainly my Seven Year War figures I was surprised at just how easy the Russians were, they really have no equipment apart from the odd rucksack or blanket roll to weigh them down and everything is a shade of brown. I went with a couple of paint guides using Vallejo Paints one from Artizan and one from Vallejo themselves, I mixed up trousers and jackets while doing some completely in one colour and am happy with the results.

So I think by the end of next week I will order up a couple of anti-tank guns, 45mm and 57mm these will almost put the main force to bed. I am aiming for all the units to play the Konigsberg campaign from the 2014 Lardy Special, the only ones I am unsure of are Scouts and Pioneers, these need more looking into. I will also need to add troops to the German choices, Volksturm and Hitler Youth, but only in small numbers. After all that will come the Russian armour and vehicles, I have a large wishlist for this lot.

No club this week as our usual room is not available, so end of the month no doubt before I get shot at again.

Posted by George Anderson at 12:57