Easy night at the club, X-Wing and as I had lists prepared a la Blue Peter I only had to pack up and get out the door, I did notice this week how dark it was as I got on the road, Winter is certainly on its way. Once at the club without much ado I just chose a list and set up the spaceships, it was only as we commenced the game I found I had brought a knife to a gunfight, I got these lists from the so called experts on an X-Wing Forum, OK I am not the best star pilot but how anyone can win with this nonsense escapes me, mea culpa. 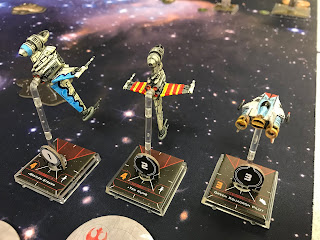 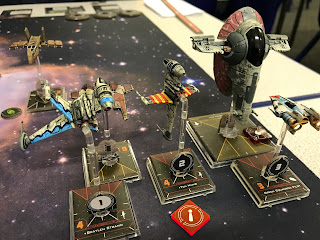 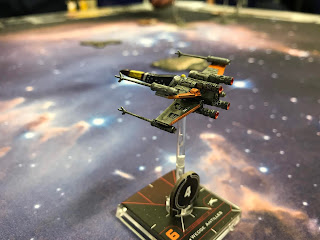 Simon usually has either good luck or bad and last night his shooting and saving was the former, I did OK but nothing spectacular, my flying bricks, two B-Wings, with sieve armour were a liability as Simon's gunnery took them apart. The game was leisurely and as time approached I ran up the white flag, I had two ships left one of which was going south as soon as the enemy looked at it and I did not fancy my lone X-Wing's chances against Simon's two. I will have to learn to take the time and put some thought into the game in the future.

I caught the latest video from the excellent Little Wars yesterday and it was about women in wargaming and examining why there are so few, it also had three women talking about their experiences of wargaming. They were all positive but one did have a moan about how men had told her what to do and even moved her troops for her, female or not you just don't let that happen, I have never seen that. Now as much as I do not care for the armies of shieldmaidens and their ilk I have no objection to playing against a woman or having women in the hobby, I have actually played against a woman and been beaten to boot. Do we need to get more women in the hobby, no, do we need more diversity perhaps, no, should we be considerate and welcoming to all who show interest, overwhelmingly yes, but because their numbers are low there is nothing wrong with that. Military history and wee sojers is just not everyone's cup of tea.

I have pledged to three Kickstarters, one arrived and it was not for me, nothing wrong with the product but I sold it on. The second is due out early next year, I have been kept informed of every step and expect it to be first class and on time. Now the third, that is a different kettle of fish, even when I pledged it was overdue, but I wasn't in a hurry and decided I could wait, it is a graphic novel about Hannibal written by Nikolas Lloyd, better known as Lindybeige, a YouTuber, the artist is Christopher Steininger, I have seen his work and it is good. The project is now something like three years behind and in my humble opinion will never be complete, Lloyd cannot seem to sit down and finish the script, I get the impression the artist is also not happy, Loyd's lament that it is harder than he first imagined does not wash as he continues to produce videos for his YouTube channel and jet around the world to enhance said videos. I decided to cancel and was told by Kickstarter that I have to contact the person who set it up, I tried to contact Lindy both by email (didn't work) and left notes on his Facebook page and YouTube channel (deleted) and got nowhere. I shall now head for SmileTitans the no doubt aggrieved publishers and see how I get on there. Lindy now has a pile of money (my pledge has been withdrawn) and we backers have nothing.

I have just finished reading Max Hastings book on Operation Chastise the dam busters raid. The first part involving Barnes Wallis is fine but the book really comes alive when describing the men, warts and all in the case of 'Bomber' Harris and Guy Gibson, who flew on the operation and the raid itself, these guys were incredibly brave flying at between 50-100 feet off the deck in the dark to bomb dams in the middle of Europe. At the moment I am reading Mark Bowden's Battle of Hue 1968 set during the Vietnam war, this again is a great read about men in battle, you can almost smell the cordite and sweat, again a book about men at war and an excellent one at that. Bowden also wrote Black Hawk Down. The books do not glorify war and although exciting are at times also incredibly sad, I can only thank my lucky stars that I was not put in harm's way during my service. 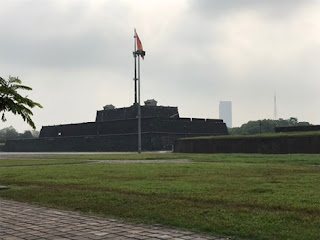 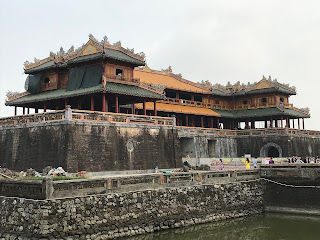 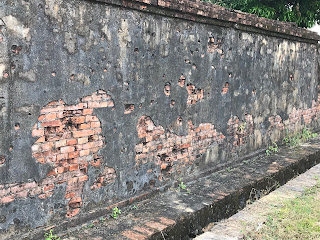 The above photos are of Hue Citadel during my visit earlier this year.
Posted by George Anderson at 09:56